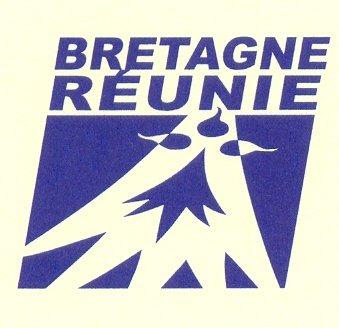 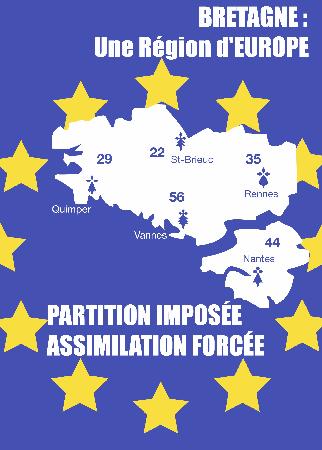 This is a communication of the Breton Association “Bretagne Réunie” (Reunified Brittany), from its local committee in Nantes (France, Loire-Atlantique department).

Being sent to French Press as well as Foreign Press.


For the last 67 years, Brittany has been undergoing an administrative partition imposed by the government of Vichy, which has thus separated the Loire-Atlantique region from Brittany. This discretionary separation gave birth to a regional assembly called “Pays de la Loire” which is responsible for continuous identity and cultural alienation, most probably unique among the democratic European States.

In the name of this artificial identity, the Government does its best to progressively eradicate the Breton culture from our region. For instance : teaching Breton language and culture has disappeared from the syllabus at Nantes University, television programs are no longer broadcast in Breton on channel 3 and the prohibition to broadcast facing the private channel, TV Breizh...

Last but not least : the project of the Minister of Justice to close down the judiciary unit of Brittany in June 2007, which was suspended only because the Breton jurists strongly denounced the identity alienation process put on our population in our region by sending a letter to the President of the Republic.

It is yet the same artificial identity which is promoted in the various schools to the young people in order to “cultivate” the “ identité ligérienne” (school festivals, regional council of the youngsters).

By these means, the Bretons, like all Democrats, cannot conceive any longer that such a community, which has been overwhelmingly rejected by the population of Loire-Atlantique, can carry on with its discriminations towards their inhabitants.

We take the opportunity of this sports event of the cycling race «Tour de France» to send you a document in which we explain the situation.

Ladies and gentlemen, we thank you for your attention and we are pleased to send you our kind regards.


The PDF document “Discriminations” : Brittany : an imposed partition, a denied identity (8.5 Mo, 46 pages) is available below.
For the moment it is only in French, except a few parts, like annex 9, page 38, which translation is below, as an example, in full text and also in PDF (1 page).

If you personally have some links with British Press, we would be very grateful for your help in spreading this document “Discriminations” as widely as possible.


Annex 9, p. 38. “Insults on French national radio broadcast” :
The Football League Cup Final between PSG and Lens has again displayed racial hatred and we shall refrain from contributing to it by repeating the words on the banner. Suddenly, racism has become a matter of concern to football and, through it, a matter of high financial interests : the financial impact of sport to the economy is well-known, but this time, enough is enough ! The [French] justice seems prepared to take up the matter and act.

The public Prosecutor's department of Bobigny [near Paris] has set up an inquiry “into provocation to hatred and violence”, and police forensics will look for DNA on the bits of the banner they have confiscated through which they hope to identify the culprits. If caught, it has been reported, the culprits risk “one year’s imprisonment and a 15.000 € fine” [= about £12.000].

We can only approve the healthy awakening of the French Justice system to the problem and we stand firmly with the “People of the North” [North of France] in their indignation.

But what about the insults suffered by the Bretons, the Basques, the Corsicans and Alsacians & co ?

Let us recall the fate of a similar complaint, about “Les grosses têtes” [The big – or “bright” – heads or brains], broadcast on RTL radio on Feb 2nd 2006.

Excerpts of a “song” included :
“Ah ! Are you familiar with Brittany, with its women in head-dresses and its men wearing grass skirts, their children are hydrocephalous, boys are as wicked as the girls are dirty” (...) “In Brittany, in Brittany they drink andouille juice” [andouille, as well as being the word for a coarse sausage, is also a term of abuse meaning « idiot »] “and artichoke syrup, and, run naked through the moors, drunk” [in pop. French : “round”] “as hats, and spend their nights in the light of the prune lighthouses” [this is a pun – a “far” is a Breton cake, “phare” is a lighthouse, both are pronounced the same] (...). “And from Quimper to Concarneau, women pass by with pigs in prams, while their sailor husbands relieve themselves in the Ocean waves and refuse to sign the Kyoto Protocol.”

The Breton Agreement for Democracy and Human Rights brought an independent action for damages, and its lawyer, Me Choucq, lodged a complaint with the Senior Examining Magistrate of The High Court in Paris, on May 2nd 2006.

These [artistic] “works”, the humour of which is at the very least arguable”, commented Me Choucq, in describing the Breton men as wicked, Breton women dirty, their children hydrocephalic, in attributing to them exhibitionism and orgiastic alcoholic habits, in displaying their descendants as pigs – unquestionably these “works” strike at the honour and reputation of persons originating from Brittany.”

This was the answer from the General Attorney of the Republic in charge at the Paris Court of Appeal, received on July 19th 2006 :

(...) “It does not seem appropriate to start proceedings which would have no chance of success, without changing Case Law.”

As a result, we are impatiently waiting for the French Jurisprudence to get in line with the standards of European Jurisprudence, namely, the Court of Justice of The European Council in Strasbourg [France], to whom we complained at the end of January 2007. We still await an answer.


See the original in French on (voir notre article).

discrimination.pdf Document issued by “Bretagne Réunie” about the partition of Brittany.“Discriminations”. Brittany: an imposed partition. A denied identity.. Source :