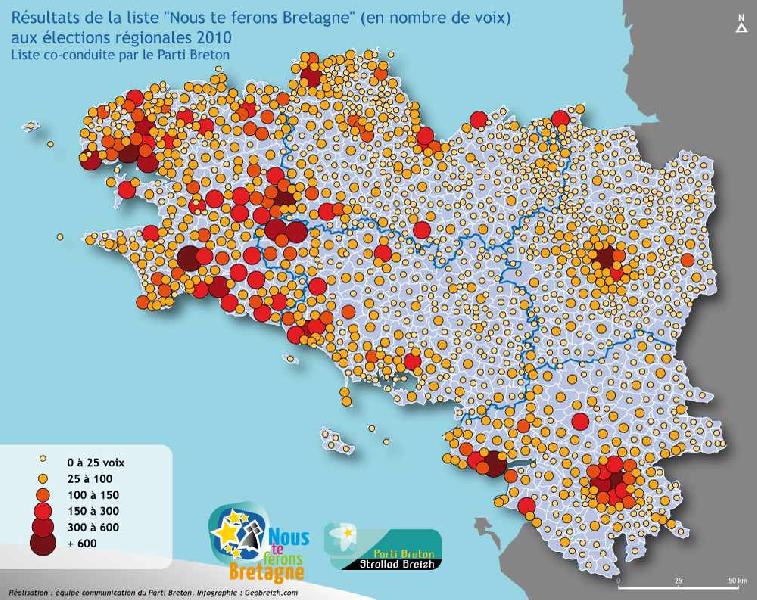 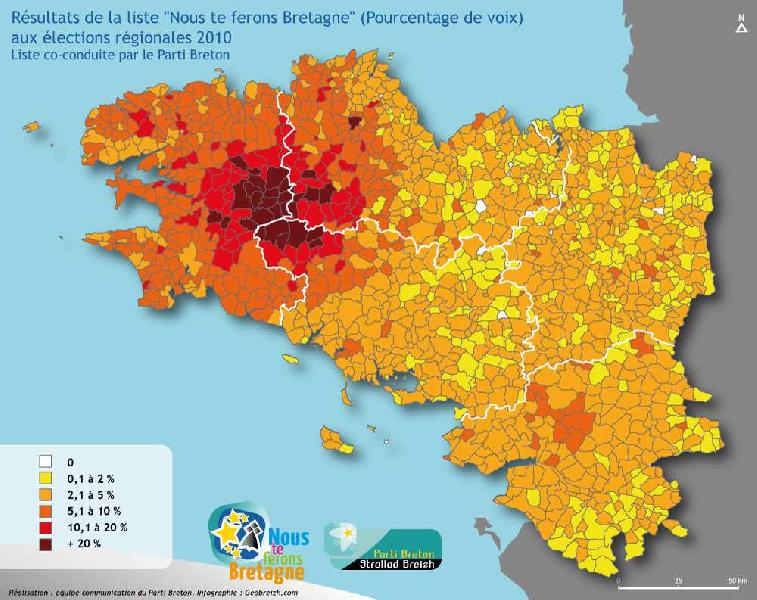 Percentage of votes. Realisation : Parti Breton communication team. Infography : Geobreizh.com
With the results of the regional elections, the Breton Party is ever more convinced it forms a credible independent force, capable of giving Brittany a real ambition

The Breton Party wishes to thank its partners and the Breton voters who trusted in the list "We will make you Brittany". The Breton Party welcomes a rising Breton vote since the European elections in which he had submitted a list called "The Voice of Brittany in Europe". For all 5 counties of Brittany, the number of votes rose from 32,710 to 58,777. This increase of 79 % is due to a broader partnership with Christian Troadec as head of the list, and with the Independent Ecologist Alliance, and to the great efforts of our members and supporters.

We would have been pleased, of course, to reach the 5 % bar. However, the score of 4.29 % in administrative Brittany and 2.62 % in Loire-Atlantique, makes the Breton electorate independent from hexagonal Government parties, progress of more than 26,000 votes between the European elections and the regional elections in the space of 8 months.

The abstention rate of more than half of voters, marks the limit of an electoral system on its knees. The abstention rate is evidence that the regional institution has no consistency in France. In the absence of concrete evidence of the usefulness of the regional institution in everyday life, the majority of voters chose according to the left / right tradition. French politics seems to revolve hopelessly around presidential elections. Parisian political parties won the elections ... Brittany, however, did not win anything!

Voters of Brittany mobilized firstly - and rightly - to punish the regressive government policy. However, the problems of harmonious development of Brittany remain. A lack of powers, of fiscal autonomy, of a truly Breton political will, induce that the future regional politicians will only act at the margin of a policy dictated by the French state in Brittany, leaving the Bretons in an unequal situation compared to 200 million Europeans who are free to implement specific regional policies in the European federal states.


The Breton Party believes that it does not have to give orders to his voters for the second round.

Between the Socialist Party, a centralizing party without any real ambition for Brittany, which has benefited mainly of the anti-Nicolas Sarkozy effect, and the UMP, a conservative party equally subservient to the system in Paris, the only good alternative will be the constitution a Breton independent and progressive force. The presence of a third list with Europe Ecology might have opened opportunities mainly because of programmatic convergence but ambiguities within Europe Ecology are particularly numerous about the reunification of Brittany (let's recall Europe Ecology is allied in Loire Atlantic with Jacques Auxiette, one of the main opponents of reunification).

The Breton Party calls the Bretons to defend together different politics for the future of Britain.


For the Breton Party, the president, Gérard Olliéric