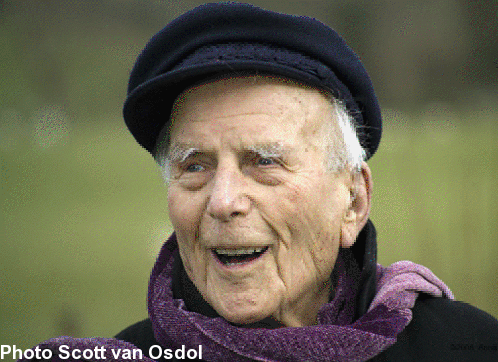 Micky smiling outside his home at Beudy Gwyn in Wales during the shooting of his film (1998). Photo credit to Scott van Osdol photographer for the film about Mike Burn. With kind permission of James Dorrian. 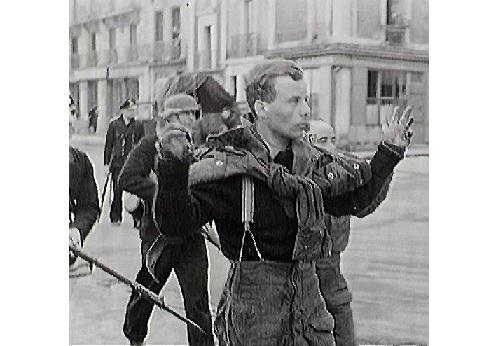 Mick Burn after capture. With Rifleman Paddy Bushe behind him. With kind permission of James Dorrian. 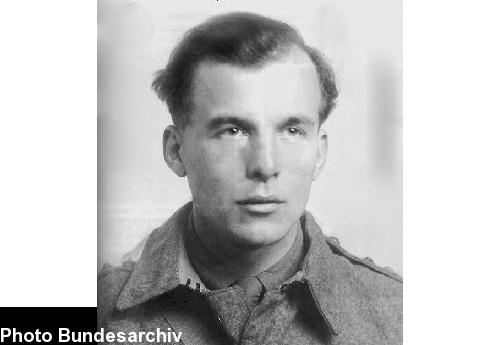 Mick Burn as a prisoner of war in Germany. Photo Bundesarchiv. With kind permission of James Dorrian.
The great heroe of the Saint-Nazaire Raid, Mike Burn, died yesterday

As a film (1) telling his life, for which James Dorrian is advisor and co-producer, will soon be finished, Michael Burn died last evening after a stroke. He was 97.

James Dorrian mailed the CREDIB of Saint-Nazaire last night : « Sad news this evening. Micky Burn died a few hours ago, after a massive stroke. He was unique, and will be sadly missed ».


He had already had a stroke in July, as James Dorrian, on his blog (2), writes : « Saturday [July 10th] was spent with Micky Burn, who has now left hospital and is being looked after at home. For someone who has had a stroke, his intellectual grasp remains amazing, with a memory of past (in his case, at almost 98, VERY past) events that puts the rest of us to shame. »


Michael Clive Burn, is an English journalist, commando, writer and poet. In connection with his part in the Operation Chariot (3), he received the Military Cross (MC), the third most important British distinction awarded to British officers.


Saint-Nazaire and the Breton people will not forget his courage to fight against the nazi Monster.


(1) Mike Burn's autobiography « Turned towards the sun » is the red thread of the documentary film by James Dorrian.

(2)James Dorrian's blog : (voir le site) « Dedicated to promoting the memory of the March 1942 Combined Operations raid on the French Atlantic port of St-Nazaire, whose purpose was to deny Tirpitz the use of the giant 'Normandie' dry dock. The raid succeeded in its aim - but at a heavy cost. »

(3) The St Nazaire Raid or Operation Chariot : the British raid that, in the night of March 27-28th, 1942, was going to change the course of the « Battle of the Atlantic » making out of use the « Normandy Dock ». Following that Mick Burn was made a prisoner and stayed in the Colditz camp where he helped the Secret radio operator. Then he published in The Times in 1945, about what had been going on in Colditz.


His obituary has been published on Sept. 6th by the Telegraph : (voir le site) with a photo of his capture in Saint-Nazaire. With his fingers he gives the V for Victory sign.

Another one on September 13th by the Washington Times : (voir le site)

May he Rest In Peace ,..We may feel that nothing of which we have any knowledge or record has ever been done by Mortal Men,which surpasses their feats of Arms .Truly we may say of them,when shall their Glory fade ?...Winston S.Churchill (To the Commandos)

Very sad to hear this news. What a character! What a life! He was collaborating on a film about his life right up to the end. He and his colleagues had a special courage and determination. RIP Micky burn