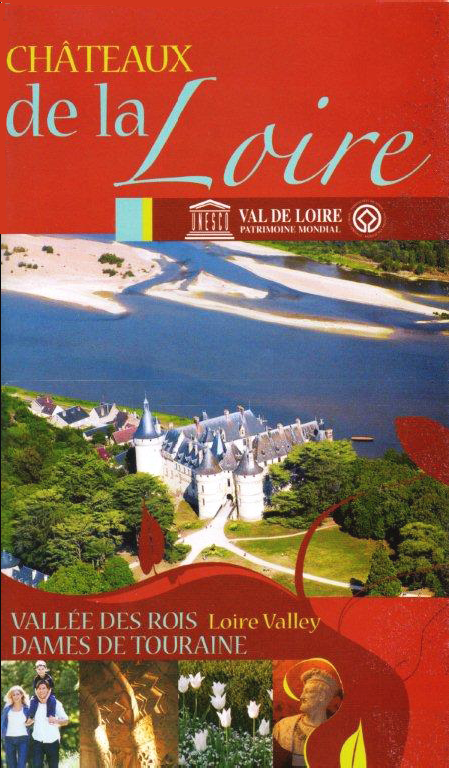 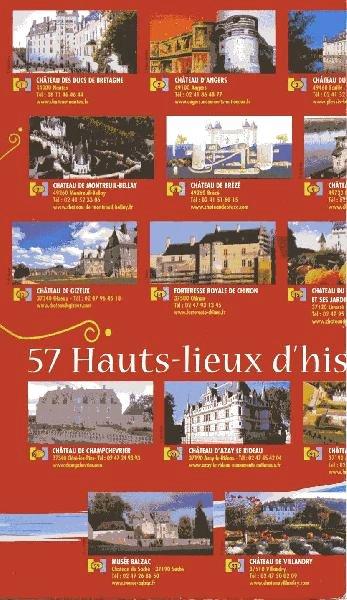 The monuments on the leaflet. The Castle of dukes of Brittany is first.
''Bretagne Réunie'' to Unesco: Nantes is not in the ''Loire Valley''

Press release
(voir notre article) on June 30th for the texts and its joined documents in French.

It is in year 2000 that Unesco classified into the World Heritage of Humanity, the « Val de Loire between Sully-sur-Loire and Chalonnes ». The protected area includes the departments of Loiret, Loir-et-Cher, Indre-et-Loire and Maine-et-Loire, and it is, very logically, that its limits are at the borders of the Armorican geological massif.

Regrettably, some elected representatives appropriated the protected label, to integrate in the area castles and abbeys which are not in «Val de Loire», one of them being the Dukes of Brittany castle in Nantes, in the aim to take advantage from the tourist development around the classified area.

In fact, it serves a less noble cause, that of destruction of the Breton identity of the Loire-Atlantique and of its monuments. The dukes of Brittany castle in Nantes has already paid a heavy toll to this «illegal» policy:

Nantes' Museum of Arts and Popular Traditions was eliminated from disposal in the castle. It was nevertheless with those of Quimper and of Rennes, one of the most important of Brittany. Its museum of Salorges, too maritime and not fluvial enough, was also eliminated. The history of the Duchy and Dukes of Brittany, over more than six centuries, was hidden. And finally the City Council of Nantes refused the proposition of the other Breton departments to join the development company of the Castle.


When one knows that the Departmental Archives of the Loire-Atlantique keep and preserve a treasure: “The Registers of the Chancellery of the Duchy of Brittany”, that the Dobrée museum in Nantes possesses a tremendous collection of coins from the dukes of Brittany, we can wonder about the arrangements (and developments) of the Dukes of Brittany castle in Nantes, and the political will to hide the history of the inhabitants of Nantes until XVIth century.

Apparently, the Dukes of Brittany castle integration in «Val de Loire» was planned, and all its history, its collections, had to disappear, for the benefit of a municipal museum.

The association Reunited Brittany (Bretagne Réunie) was able to get a leaflet entitled «Châteaux de la Loire, Vallée des Rois, Dames de Touraine» (Castles of the Loire, Valley of the Kings, Ladies of Touraine) – stamped with the Unesco World Heritage logo – including the Dukes of Brittany castle.

Bretagne Réunie, with the Cultural Institute of Brittany (Institut Culturel de Bretagne), the Breton Collective for Democracy and Human Rights (Collectif Breton pour la Démocratie et les Droits de l'Homme) and Eurominority, then sent on June 6th of this year a letter to the director and members of Unesco World Heritage of Humanity Committee, to demand that the classified sector «Val de Loire» were protected from any political intervention.

By this action, Bretagne Réunie wishes to remind that the right for Brittany history and culture is an integral part of the rights and fundamental liberties protected by numerous international agreements.

Bretagne Réunie wishes also to recall the terms of the Recommendation 1283 (1996) of the Council of Europe, «History and the learning of history in Europe», (voir le site) which should guide the decisions of our elected representatives in this domain.

Abstracts :
1. – People have a right to their past, just as they have a right to disown it. History is one of several ways of retrieving this past and creating a cultural identity. It is also a gateway to the experiences and richness of the past and of other cultures. It is a discipline concerned with the development of a critical approach to information and of controlled imagination.

3. – Historical awareness is an important civic skill. Without it, the individual is more vulnerable to political and other manipulation.

8. – Politicians have their own interpretations of history, and some are tempted to manipulate it. Virtually all political systems have used history for their own ends and have imposed both their version of historical facts and their definition of the good and bad figures of history.

14-ii. – The subject matter of history teaching should be very open. It should include all aspects of societies (social and cultural history as well as political). The role of women should be given proper recognition. Local and national (but not nationalist) history should be taught as well as the history of minorities. Controversial, sensitive and tragic events should be balanced by positive mutual influences.

Brittany possesses its own History, that all the Bretons – including those of the Loire-Atlantique – have the right to know.
In spite of the – even if artificial – administrative divisions of Brittany, there is obligation to respect its history and to make it known.


The Unesco World Heritage Committee will meet in Seville from June 22th till 30th of this year. Let us hope that its members will know how to put back a little of order by asking for the withdrawal of this leaflet from display stands, so that the classified site «Val de Loire» is respected, and that our dukes can find again in Nantes the place which they deserve and where they belong.