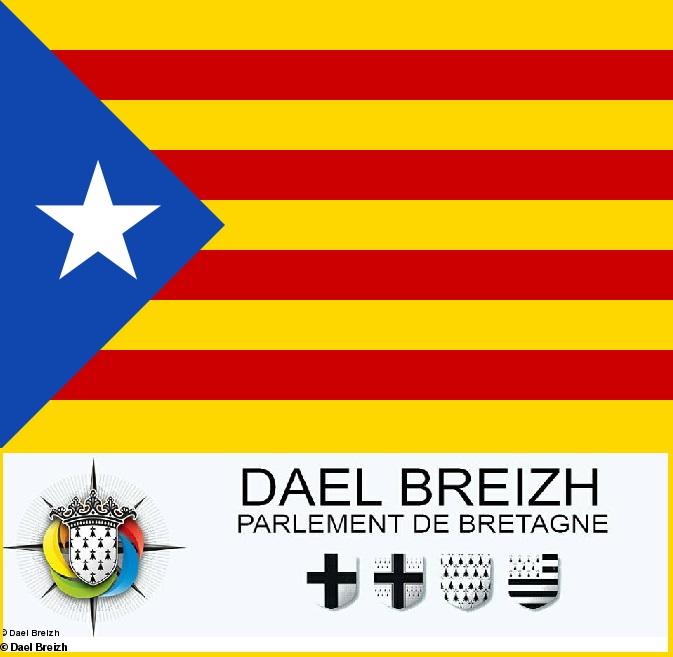 In the name of the Breton people, the Parliament of Brittany gives its full and unshakeable support to the Catalan people, and already recognizes the current and future authorities of the Government and the Parliament of the Generalitat de Catalunya.

In these dark days for democracy, we, the Breton parliamentarians, democratically elected in November 2016, wish to express our support to the Catalan people and their representatives of the Government and Parliament.

The Parliament of Brittany is at the highest point concerned by the democratic situation in Catalonia.

- To grab the means of expression such as the ballot papers for the popular consultation on October 1st;

- To intervene by strength in three Ministries of Catalonia (Economy, External Affairs and Social Affairs);

- To block the means of payment of the Catalan Treasury;

All this make this Operation Anubis (1) a blatant snub to the expression of democracy.

This non-respect of the Catalan citizens' decision marks a turning point in the Spanish democratic system: it is already signing the end of the autonomous status enjoyed by Catalonia. This refusal will inexorably lead to consequences for human life and international Right.

France, for her part, has undoubtedly used and will use the same methods which, unfortunately, will recall the dark years of her history and of our own: in 1532, loss of the sovereignty of Brittany by a coup de force at the Parlement de Bretagne in Vannes (State of Brittany); and in 1789, loss of our status of autonomy and of our Parliament of Brittany sitting in Rennes, illegally and unilaterally.

History repeats itself: the great States never learn from their mistakes, and this shows a total incompetence if not a refusal to accept the peoples who compose them, to share with them, to listen to them and to recognize to them the Imprescriptible Right to self-determination.

(Translation Maryvonne Cadiou from ( voir l'article )) with commentaries in French.

(1) Operation Anubis: (voir le site) on wikipedia, English text. More developped and for each day from September 21st to October 1st than the page in French. But see the detailed list of the persons arrested on the French page: (voir le site) (note by the translator).

Note about The Parliament of Brittany

The Parliament of Brittany was democratically awakened by elections organized in November 2016 by the association KAD, Kelc'h An Dael ( (voir le site) ); and sits monthly since January 2017, on the basis of a monthly and nomadic parliamentary session in Brittany's 5 departments. The work of elected parliamentarians, including diaspora, will be visible on this site in construction: (voir le site) . Work in participatory democracy of voters, within Mixed Parliamentary Commissions, will also be published. The current parliamentary cycle is triennial, from January 2017 to December 2019, when there will be new democratic Breton elections, open to all Breton democrats and patriots, all sensitivities combined. The Parliament of Brittany's purpose is to give back a democratic voice to Brittany, through a constitution, a body of laws, concrete resolutions to face the problems of everyday life...

( voir l'article ) Elections in Surzur, November 2016, report in French only;

This body right now does not have any recognition as an institution and the laws it may vote cannot be enacted since Brittany does not exist as an independent state or even as an autonomous region. However, this Parliament was democratically elected in November 2016, elections organized by the association KAD, Kelc'h An Dael (voir le site) . This parliament sits since January 2017, on the basis of monthly and nomadic parliamentary sessions in Brittany historical territory. Not wishing to wait for official reunification of its territory and independence, the elected people of this Parliament work on a constitution, body of laws, and concrete resolutions facing the problems of everyday life. The work of elected people and commissions shall be visible here (voir le site)
Voir le mur de Parlement de Bretagne - Dael Breizh
Vos 0 commentaires