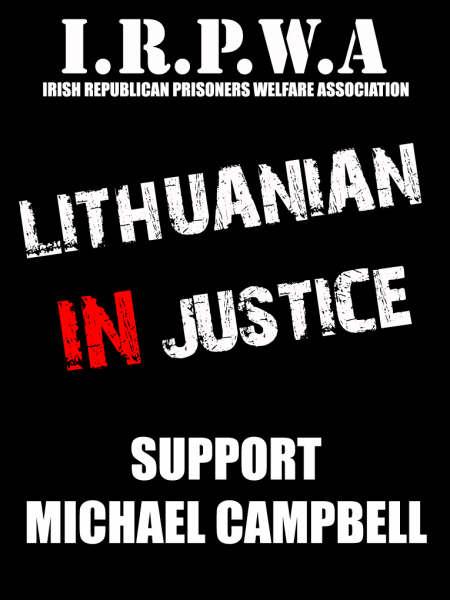 A protest poster (above) in support of Michael Campbell wo is still in prison in Lithuania without charge after over a year.
MORE IRISHMEN FACE 'BALTIC GUANTANAMO'

An Irishman was arrested in County Meath last week pending an application for his extradition to Lithuania on 'terrorism' charges.

Seamus McGreevy could be extradited to Lithuania to answer charges of terrorism along with Liam Campbell who is already in custody in Ireland. Mr McGreevy, who says he has never been to Lithuania, is the third Irishman to be could up in the web of terrorism allegations that is being spun by the security services of England and Lithuania. Michael Campbell, who is the brother of Liam Campbell above, has been held in detention in Lithuania without charge for over twelve months.

Michael Campbell was arrested in 2008 in Vilnius, Lithuania for allegedly trying to buy contraband cigarettes and/or arms and has been kept in detention in a Lithuanian jail ever since. In a letter that was forwarded to the League in December 2008, Michael Campbell wrote about the difficult conditions that he was being kept under and complained that he had also been refused contact with his wife (who was also arrested last January, but later released) and other family members.

The Celtic League wrote to the Irish Ministry of Foreign Affairs expressing its concern about the welfare of Michael Campbell in a Lithuanian state prison system that has been heavily criticised for the ill treatment of its prisoners in the past by the Council of Europe Committee for the Prevention of Torture (CPT).

The Celtic League has written once again to the Irish Ministry of Foreign Affairs to request that the extradition of Liam Campbell and Seamus McGreevy is not carried out. In the letter the League advised that if the Irish Government agreed to the arrest warrants and extradition was granted it could be in breach of Article 3 the European Convention on Human Rights (ECHR). The full text of the letter can be found below:

I am writing to you regarding the recent arrest of Seamus McGreevy of County Meath, who has being held in custody pending an application for his extradition to Lithuania on 'terrorism' charges. We understand that Liam Campbell is also already in custody on the same charge.

As you will know from our previous correspondence to you that we are aware that Michael Campbell - Liam Campbell's brother - is already in detention in Lithuania, while the Lithuanian authorities carry out their investigations against him. As we pointed out in our earlier correspondence to you, we have our separate concerns for Michael Cambpell's welfare, who has now been held without charge in Lithuania for over twelve months. Indeed the Celtic League, received a copy of a letter from Michael Campbell in December 2008, in which he clearly expressed the difficulties that he was facing in detention in Lithuania in terms of his living conditions and restricted contact with friends and family.

As you can appreciate we believe that our concerns for Michael Campbell are well grounded in light of the most recent published report from the European Committee for the Prevention of Torture and Inhuman or Degrading Treatment or Punishment (CPT), which was highly critical of conditions in both the Lithuanian police stations and prisons. Therefore we believe that the welfare of Seamus McGreevy and Liam Campbell, if extradition to Lithuania is agreed to, could potentially be in jeopardy. Moreover as our Director of Information, Bernard Moffatt, stated in a letter to the Minister for Justice, Equality and Law Reform, Dermot Ahern TD, on 21st September 2008:

"Were an Irish national to be returned to a police or prison environment in a country where brutality and ill-treatment is systemic surely this would place Ireland in breach of Article 3 of the European Convention on Human Rights."

In addition to this, the case against Mr Campbell is far from over and from the little information that has been made available by the Lithuanian authorities about it, their investigation could continue further for at least six months more, without Michael Campbell being charged. We believe therefore that it would be prudent for the Irish Government to refrain from agreeing to the extradition requests, at least until the Lithuanian investigation against Michael Campbell is finished and/or he is charged or released.

In addition to this, the Celtic League is one of several human rights organisations that have written to the Lithuanian Justice Minister, Remigijus Simasius, but as far as we are aware no one has received a response or acknowledgement of their correspondence. This lack of response does not particularly inspire faith in the Lithuanian state justice system or their concern for human rights.

We hope you can appreciate our concerns and we look forward to hearing from you soon.

Related links on Celtic News at: