Respected representatives of Wales, respected Past Grand Bard and representative of Cornwall. Brothers and Sisters, dear representative of the Region, friends, welcome to this Open Gorsedd at Brasparts. Welcome to Brittany to Esther and Jimmy (1). You are the Gorsedd y Beirdd ring of the life and hopes of the Bretons now! You are at home now! 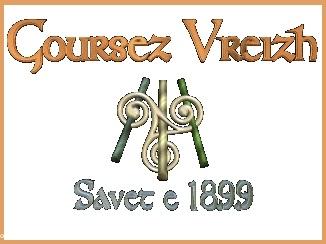 I want to thank all of those who assisted in making the site and the circle of stones accessible. It was a hard task which has however borne its own fruit!

What’s new in Brittany? Some things worthy of praise but also others of criticism! There has been quite a lot of changes to the political plan in France and in Brittany. At the exact moment of the presidential elections, people almost spoke only of the money misused by one of the candidates, which has polluted the campaign and discredited politics once more.

There has been virtually no question of the political programmes proposed by the parties involved. And that which concerns the regions and the environment was completely absent!

Beyond this the tight links between the various medias and the auditing accounting institutions are dangerous. Under the influence of this poisonous mixture, the useful vote has appeared as a necessity even in the first round. Do the media wish to fashion public opinion instead of giving an account of the way in which ideas are expressed by the parties? Do they help people to incorporate and marshal by hammering results into their head every two days? What’s the point of voting?

One must restate once more that real democracy must be informed, illuminated by Reason, directed towards the common good. So that people will not be forced to eliminate those they do not want by voting for those with whom they do not share very much.

A new party has obtained power, La République en Marche. Marching towards what, no one knows exactly so far. However many didn’t even bother to go to the polling station in the second round. The governing majority today is therefore very fragile, it should not forget this! Only two voters out of ten support it!

It would be dangerous to despise those people who are nothing or to depise the unlettered! As was said of old : The Republic is a good mother who loves all her children, one as much as another. So, the President of the Republic must remember that! Or he will cause anger!

We welcome the victory of Paul Molac on of the rare persons who have been elected in the first round. He is an excellent Breton speaker, as is Yannick Kerlogot also elected. We hope that these two will do all in their power to ensure that account is taken of the problems of regional languages by the new government.

Monsieur de Rugy, of Nantes, has been named as President of the National Assembly. We hope that he will not forget that he was in favour of the reunification of Brittany, recently. Will there be a Political will to put this job back on the agenda? We shall see.

We extend our salute to the three new MPs from Corsica, committed patriots and we hope that they will be able to collaborate with the Bretons.

We approve the words of our new president on the subject of Brexit because if it is true that Great-Britain should change its mind and stay in Europe, then the door is always open! But is the president’s offer sincere or does it cover up a covetous desire to obtain the social seats of our neighbour’s businesses? For us Bretons, the door and our hearts are always open for our Welsh and Cornish brothers!

To conclude I’d like to mention a grande dame who left us recently. She was closer to our culture than to the tradition of France, one of the last countries that granted equal political rights to women in 1944. The first time that a woman was elected as a town councillor, this was in Brittany, in Douarnenez when Joséphine Pencalet was elected during the great strike of the sardine cannery workers in 1925. This vote was cancelled but the way was paved for more Liberty, Equality and Fraternity or Sorority if you like it better. May Simone Veil’s world be white on the other side of the deep sea! May her world be white in the memories of the progressives! May her world be white for ever!

The Gorsedd of Brittany on ABP in English

2015, December 15th: (voir notre article) : The Gorsedd questions the ideological basis of the draft constitutional revision by the French Government and is concerned about the possible infringement of individual and collective freedoms

2012, July 21th: (voir notre article) : The Gorsedd of Druids in Arzano: a rite in which politics has its place. One video : After the ceremony Mick Paynter, Grand Bard of Gorseth Kernow since 2009, poet and activist... and Penri Roberts Druid of the WelshGorsedd y Beirdd - who won a poetry contest and thus wears green leaves on his fronthead - tell ABP about their druidic assemblies.