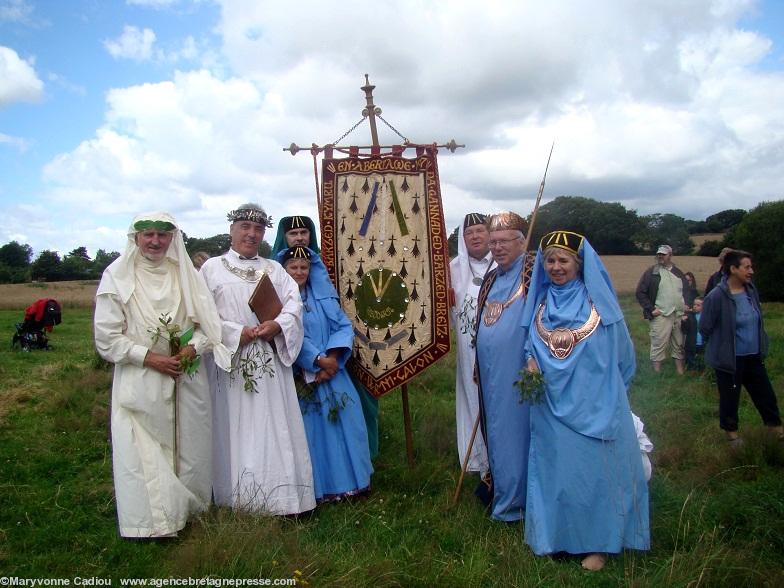 After the ceremony. With the Breton Gorsedd banner. And with Maureen Fuller deputy Grand Bard of Cornwall on the right. Two other members of the Breton Gorsedd here are in charge of relations with the Over Channel Gorseddau.
The Gorsedd of Druids in Arzano: a rite in which politics has its place

A druid came from Wales as well as the Grand Bard from Cornwall (the Gorseth Kernow does not have druids). Per-Vari Kerloc'h grand druid of Brittany, presided over the ceremony. They wear green, blue and white robes. Some are new, others have decades of loyalty to their druidic practices, introduced in the nineteenth century in a romantic current who wanted to see the rebirth of Druidry which is known only through texts written by the Romans, because druids rejected writing: " writing kills speech ". No priest, no man at the head (feminine Grand druids have also existed). Mistletoe, the sword, the Druidic symbols: everything had to be invented or reinvented. A strong connection to nature, to the strengthes of Earth, to the sun, the wind, to Brittany and to Celtic languages​​.

This is not the " Gorsedd Digor " by Jakez Riou – a play that mocked the Druids – which will take place on this Sunday morning. It is a solemn ceremony attended by members of the " Ramoneurs de Menhirs " (" The Chimney Sweepers of Menhirs ", a very famous and appreciated Breton musical group), personalities from all over Brittany, curious persons, friends, artists...

This morning in Arzano, in the large meadow which cows have moved away from for a time, the Grand Druid climbs on the stone in the center of the circle, the Maen log. The ceremony begins with a tune played on the harp, then on biniou (Breton small bagpipe) and bombard, and a song by Gweltaz Ar Fur. The Grand Druid, after thanking every present one, starts his speech in Breton. And he goes on with the [French presidential] election campaign, cites François Holland, Mélenchon, Marine Le Pen, thanks the president of Region of Brittany for the work done for the Region, scratches on the way those who mock Brittany and suffer the consequences. He gives a balance sheet of the year, in Breton, strongly and without emphasis, he speaks of the Redadeg (1) and congratulates its organizers, speaks of the University, of the progresses for language and culture of this country. But he does not forget, and fears the future. What will happen to the Charter of regional languages (2)​​? What will happen with decentralization? What will happen to Brittany in the economic and political context?

He smiles, releases the sword from its sheath. Connivance shared with his friends. Did onlookers with cameras understood the Grand druid's deeply political meaning of the speech? That the apparent “folklore” of this ceremony hides a fierce determination to defend a spirituality that is not Cartesian, a struggle for the Breton man, but first of all, for the Free Man. You may read again the former Grand druid Gwenc'hlan the Scouezec's preface to the reissue of " Comment peut-on être breton " (How can we be Breton?) by Morvan Lebesque, in French. Per-Vari Kerloc'h succeeded him after his death, ( voir l'article ).

Superb blog! Do you have any hints for aspiring writers? I'm hoping to start my own blog soon but I'm a little lost on everything. Would you recommend starting with a free platform like Wordpress or go for a paid option? There are so many options out there that I'm completely overwhelmed .. Any ideas? Thanks a lot!
[url= (voir le site) ]louboutin outlet[/url]
(0)
sophie fiverr

pVgQa7 I saved it to my bookmark website list and will be checking back in the near future.
(0)
WilliamSync

I just couldn't depart your website before suggesting that I actually enjoyed the standard information a person provide for your visitors? Is going to be back often to check up on new posts Mckew
(0)