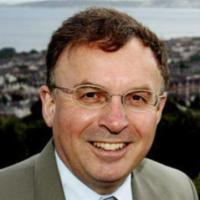 Andrew Davies AM told the League: "Let me reassure you that it has no implications whatsoever for the border or the territorial integrity of Wales." (image: Welsh Assembly Government)
WALES: NO IMPLICATIONS FOR TERRITORIAL INTEGRITY ASSURANCE

The creation of a `West Cheshire – North East Wales Sub Region' has `no implications whatsoever for the border or the territorial integrity of Wales' the Assembly government have told the Celtic League. They were responding to concerns from the Celtic League (see link below):

From: «Andrew Davies Minister for Finance and Public Service Delivery

Thank you for your letters of 29th April 2008 and 29th January 2009 to the First Minister about the West Cheshire – North East Wales Sub Region. I am replying as Lead Minister for the Wales special plan. I am very sorry that you have had to wait so long for a reply – I have established that this was due to a problem with our administrative systems, but I am glad now to have the opportunity to respond to your concerns.

Over the last seven years organisations and local authorities within the West Cheshire and North East Wales area have undertaken a joint work programme to gain a better understanding of the shared social, economic and environmental issues that connect both sides of the boarder. The work has culminated in the preparation of a non-statutory sub regional special strategy, which represents a significant step forward for cross border cooperation and development between North East Wales and West Cheshire over the next fifteen years.

Within the cross border area there has been a history of fragmentation in delivery, implementation and coordination arrangements, both across the border and internally on either side of it. As a result of this project, the partners involved in formulating the SRSS have now put together a coordinating delivery body to implement action. Cross border collaboration is vital to ensure a coherent vision and to build on the key economic and environmental links acreoss the area, as well as to ensure seamless service provision for citizens. Let me reassure you that it has no implications whatsoever for the border or the territorial integrity of Wales.

The Mersey Dee Alliance 5MDA) was reconstituted in 2007 as the key delivery body of the SRSS, and was born out of the recognition of the shared economic and community interests across the West Cheshire, Wirral and North East Wales area. The Alliance is led by the local authorities of the area, along with the Welsh Assembly Government, the North West Development Agency and Merseytravel.

The MDA recognises that the Mersey Dee area as a single strong economic sub region with a population of approximately 930 000 people who do not recognise the national boundary in the ways they access employment, retail, leisure and services. Partners agree to work together on common strategic interests to sustain the economic future of the area, and facilitate a coherent approach to social, economic and environmental issues.

The MDA's business plan and delivery action plan focus around key themes of skills, employment sites, transport and accessibility and sustainability. These actions will provide key outcomes for the North East Wales Spatial Plan area. In so far as the SRSS is seen as the key spatial strategy for the cross border part of the North East of Wales, it has set the framework for the Update of the Wales Spatial Plan for this area. Planning legislation, through the Planning and Compulsory Purchase Act 2004, states that local Development Plans for any area have to have regard to the Wales Spatial Plan. It s during the development of these plans that interested parties will have the opportunity to make their views known to a Planning Inspector through a Public Inquiry.

Both the SRSS and the Updated Wales Spatial Plan are clear on the need to conserve and enhance local distinctiveness including heritage, landscape, Welsh language and culture, and all round character and sense of place of a settlement area. Key to the delivery of sustainable communities on the Welsh side of the border will be ensuring that local and regional priorities are aligned and that they can influence each other appropriately. The linkages with local communities through Local Service Boards, Community Strategy Partnerships and other key groups will be essential. This work is already underway and will continue to develop and strengthen in the future.

One of the key elements in development of the SRSS was a formal public consultation phase launched in December 2005. Over three hundred invitations were sent to key partner organisations to the consultation launch event and over a hundred people attended. Thirty six formal responses were received from a range of public, private and voluntary organisations and these helped to shape the final document. In March 20007 the SRSS was jointly launched by Sue Essex AM and Michael Gallagher, North West Regional Assembly. The successful event was attended by key stakeholders from the cross border area.

On 5th March 2008, a regional consultation event was held on the Updated Wales Spatial Plan for North East Wales. The recently appointed lead Minister for the area, Brian Gibbons AM, commended the Sub Regional Spatial Strategy, which won a Royal Town Planning Institute Award in 2007, as a good example of collaboration and cross border working. He welcomed the key role the Mersey Dee Alliance can play in delivering the strategy. The formal consultation period for the Wales Spatial Plan closed in April 2008 and the area group revised the draft to reflect the input received. The final document was adopted by the National Assembly for Wales in July 200, and can be viewed at

I am copying this letter to the Minister for Social Justice and Local Government as the Lead Minister for social planning in North East Wales.

Yours sincerely Andrew Davies AM»