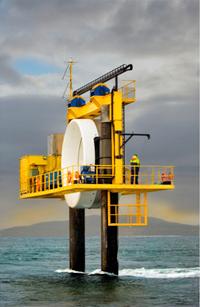 Coincidence: on the same day that is signed in Brest a general agreement on sea energies, EDF chose the Irish society Openhydro to build the first water power plants that will be installed in Côtes-d'Armor. Many countries, such as Denmark, Ireland, the UK, are already ahead of France and Brittany on this respect.

The Breton Party repeatedly expressed the opinion that sea energy industry should represent a major strategic direction of development, be it for industry and employment, or for Brittany's energetic independence, or for environment.

For the Breton Party, the causes of this backwardness are :

• France's lack of interest for the sea. France insists in leading in Brittany a tourism and real estate policy;

• the provincialist behaviour of Brittany's Regional Council, that prefers spending 1,5 billion euros to reduce train distance between Rennes and Paris by half an hour, than investing in sea energies.

. the lack of Breton institutions able to have a strategic view and with the means to implement it ;

. the lack of a Breton Energy Agency (as in the Southern Basque Country for instance).

The Breton Party invites all the Breton people to take into consideration Brittany's assets and to provide Brittany with institutions that will be able to lead an environmentally responsible and efficient economic policy.

For the Breton Party, the President, Gérard Olliéric