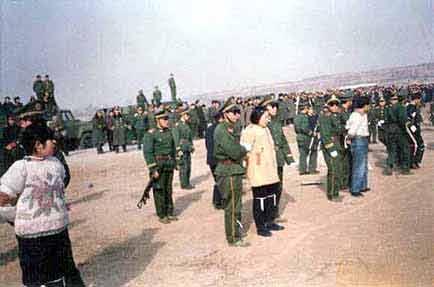 The Celtic League has attacked 'show trials' in Tibet at which those protesting for the right to self determination have suffered harsh sentences.

Television new reports of the trials released by the Chinese regime who are occupying Tibet portrayed scenes which were reminiscent of Stalins show trials of the 1930s with the accused looking dazed and intimidated. It was obvious that all had been ill treated.

In addition to those whose trials were publicly aired the Celtic League understand that many protesters have been jailed away from the public eye at proceedings closed to the media. It is highly likely that these 'secret trials' have been undertaken because of the nature of the physical injury some of those detained have suffered.

It is vital that NGOs and governments globally continue to campaign stridently for those detained to have access to independent medical assessment by a reputable international body such as the RED CROSS.

The text of the letter from the the General Secretary is set out below:

Trial and jailing of Tibetan 'rioters'

It was with rising alarm that the Celtic League learned about the rushed trials and lengthy prison terms of Tibetan activists allegedly involved in the Tibetan riots in Lhasa last month.

The trials did nothing to highlight the reasons behind why the rioting took place or the part that the Chinese authorities had in violently suppressing the demonstrators. The Celtic League firmly believes that the trials were part of a Chinese publicity stunt to appropriate the blame onto the Tibetan people – and the Dalai Lama in particular - for the riots and the suffering caused. We would also like to express and register our great concern for other Tibetan activists who have been and are likely to be tried and jailed outside of the public eye.

The Chinese authorities have shown by their treatment of Tibetan activists that they are unwilling to negotiate a peaceful and humane solution to the suffering and strife being felt by the people of Tibet under Chinese rule. In this year of the 2008 Beijing Olympics, China has shown the world that they will continue to rule with an iron fist and with little regard for human rights, despite promises made to the Olympic Committee to improve its standards.

The Celtic League supports the call of the European Parliament for EU leaders to boycott the Olympic Games in Beijing, unless China begins talks with the Dalai Lama to discuss a way forward in this crisis.