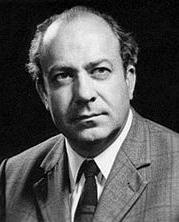 Per Denez died during the night July 30th at Romillé. Funerals will be celebrated on Wednesday 3rd at 2 pm at Rennes in the church Notre-Dame en Saint-Melaine, near Thabor.

Pierre Denis, known as Pêr Denez, was a linguist, a lexicographer, an university Professor and a writer in Breton language. A strong defender of brezhoneg, he spoke the language fluently and has published many books in Breton, essays, but also half a dozen novels. He has also published methods to learn Breton Brezhoneg Buan hag aes (The Breton quickly and easily, 1972), glossaries and studies of local dialects (especially the region of Douarnenez, the subject of his thesis). His thoughts about Breton language are collected in the book Yezh ha bro.

Brought up only by his mother, a professional dressmaker, in the city of Rennes, where the Breton language is not spoken, he had learned it by himself since the age of 13 and later while attending activist circles for Brittany during his university studies. He stayed in Rennes during the German occupation. At that time he met Roparz Hemon, the father of the Breton language revival, of the structuration of its grammar and its current spelling.

In 1945, he resumed his studies that a serious illness prevented him from continuing and prepared a Bachelor's degree in English which leads him to spend a year at the University of Aberdeen, Scotland. He taught English first in Quimper, but, according to Bernard Le Nail, because of his Breton commitments, he was soon "exiled" in Périgueux (South West of France).

Finally, he returned to Brittany when he managed to be sent to teach at Douarnenez high school. This is where he met his future wife who speaks Breton and who will help him in his lexicographic linguistic researches. He also created a bagad there.

Having attended a Doctotal thesis about the Breton language spoken in Douarnenez, he was nominated as a lecturer of the Breton and Celtic languages Section​​ of the University of Rennes 2 Haute Bretagne, where he remains for twenty-one years as the Dean. In 1981, thanks to his action, the Bachelor's degree of Breton is created by decision of the new President of the Republic, François Mitterrand. He will also obtain the creation of a CAPES of Breton (1983) - the diploma for being a teacher.

Per Denez has been president of the Federation of Associations of Breton language, Kuzul ar Brezhoneg (on wikipedia in French), chairman of the Cultural Council of Brittany and very present at its Cultural Institute (Institut Culturel de Bretagne (voir le site) ), two structures which creation followed the visit of President Valéry Giscard d'Estaing in Brittany and his speech at Ploermel (voir le site) (Video INA, Feb. 9th 1977) and the development of the Charte culturelle bretonne (on wikipedia in French). He had also met Giscard, together with Yvonig Gicquel and Polig Monjarret. It is them who obtained that Breton cultural associations would be co-financed by the State. His political commitment for the Breton cause was permanent all his life long and as such, Per Denez received the collier de l'Hermine in 1988 in Nantes.

His brilliant Academic career was overshadowed at the end by a violent quarrel with a PhD student he was in charge of : Françoise Morvan, about how Breton language should be written. She made public the debate and her views in an essay of the "settling of scores" type, entitled Le Monde comme si (The World as if), published in 2003. In this essay, Mrs Morvan revived all unfortunate statements that some Breton activists could have said or written during the war. Many think that her purpose was to discredit the contemporary Breton movement, including Per Denez.