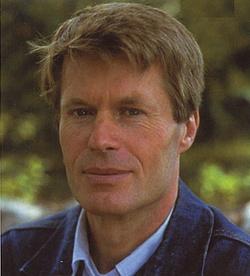 STOCKHOLM — STOCKOLM — The Nobel prize of literature 2008 was given to the writer with Breton roots Jean-Marie Le Clézio.

Jean-Marie Le Clézio was born April 13th, 1940 in Nice, from a Breton family that had migrated to Maurice Island in the XVIIIth century. His dad was an African bush doctor, British citizen. Both mother and dad had Breton roots and had in fact the same family name. He is bilingual french-english citizen of France but also of Mauritius.

« I belong to this nation », this is how Jean-Marie Le Clézio had declared candidly his guts ties to Brittany, while interviewed at the Saint-Malo Étonnants Voyageurs book Festival in 2002. « A clear statement for an universalistic writer and spokesperson for multicultural societies and negated people » wrote Hubert Chémereau, a Breton militant who had proposed Le Clézio for the Collier de l'Hermine 2009 brand. (A Breton chivalry order and one of the oldest in Europe).

In 2007, he also had declared to the magazine Télérama « My childhood imaginary world is linked to Brittany, where I spent my summers, and where my ancestors came from both on my mother's side and my father's side. My family had migrated to Maurice Island in the 18th century, but she had kept across generations the beliefs that Brittany was her place, her homeland, and her hidden place. These strong family ties explain without doubt that for me, and still today, in Brittany, the sun does not seem to be the same as elsewhere, the ocean seems inhabited, as does the land. When I was a child, I often could not sleep and I would walk through the moors at night, I would feel underground presence, some irrationals and magic. I sincerely believe that what I could have felt in Vanautu, but also close to Mexico and North America Indians, I had already felt it hiking across Breton moors. »

After so many poetical and anthropological roaming mixed with Indians vision quests, bardic journeys and its own « travel to Ixtlan » in the Mexican desert or the Sahara, Le Clézio dropped his used backpack in a house close to Douarnenez where he lives when not in Albuquerque, new Mexico. He has taught French at the university of Albuquerque like the other great Breton writer Paol Keineg, who teaches at Duke University.