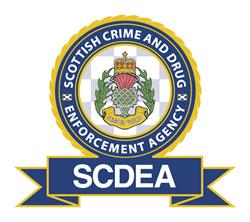 Logo of the Scottish Crime and Drug Enforcement Agency - one of a number of specialist police units in the UK.
CELTIC LEAGUE: SPECIAL POLICE FORCES UNDER SCRUTINY

The Celtic League has asked the Council of Europe (CoE) why little external scrutiny or control is exercised over specialised police units which operate in member States. The League point out that previous assurances (provided in 2004) that the Police and Prison inspectorate (the CPT) would oversee this area are not borne out in reports published by the body.

The League also say that the CoE are failing to act on a Recommendation adopted by the Council of Ministers of the CoE in 2001.

We wrote to the Council of Europe Directorate of Human Rights in 2004 expressing concern about the lack of regulation, scrutiny and control of 'special' police units in various European States. We cited examples of specialised police services within the United Kingdom, Ireland and France (those being the areas in which the Celtic League has a primary interest).

In his response Walter Schwimmer, Secretary General of the Directorate General of Human Rights, assured us that our concerns would be transmitted to:

Mr Schwimmer was also insistent that the CPT did have a guidance and scrutiny role in relation to such Special Police Units.

However, we have carefully studied the various (country) reports of the CPT over the years and we can find no focus in these reports on the activities of (for example) the Special Branch or specialised fire arms units in the United Kingdom, or their equivalents in Ireland or France. Indeed, scrutiny of all CPT (Country) reports would seem to indicate that this area appears to be outside their remit or is considered a 'no go' area by the National governments of the countries they visit.

It is not as if the operation of such forces is without controversy. In the United Kingdom the operation of fire-arms units in the Metropolitan Police has been under intense national media scrutiny of late (The De Menezes case). Similar concerns have also attended the operation of armed response units in Ireland in recent years (The Abbeylara incident). Meanwhile, in France the journalists rights group (RSF) complained in 2007 about the activities of the DST (Arrest of freelance journalist, Guillaume Dasquie).

In 2007-2008 the Celtic League engaged with a number of police services in the Celtic countries about attitudes to National languages and cultural commitment. I am pleased to say that for the most part we enjoyed good cooperation from individual police services and we hope to complete the exercise by spring 2009. Following this we will turn our attention to Special (and Specialised) Police Units, the framework within which they operate and the accountability of same. It would be useful ahead of this exercise if we could garner a Pan-European perspective in relation to this poorly scrutinised area of police work.

Can I conclude by saying that in an era of accountability, openness and communication facilitated by the internet no National Police internet sites appear to provide information. The International Police Agency (INTERPOL) site is lamentable with a dearth of real information on general police work, let alone detail on specialised police units.