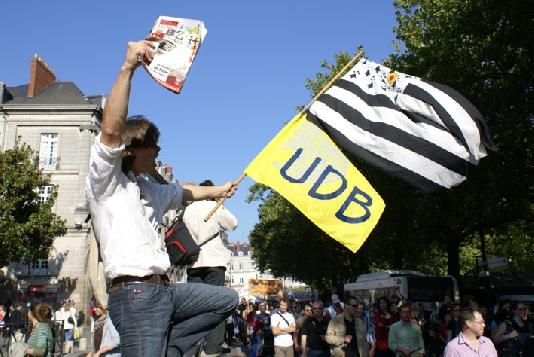 Gaël Briand at the demonstration on Saturday.
Breizh - Mass meeeting on re-unification issue

Over 10,000 people took to the streets of the ancient Breton capital of Naoned/Nantes last Saturday (20th September 2008) to demand the reunification of Brittany.

The demonstrators - a large proportion of which were young people - were calling for the re-unification of Breizh/Brittany, in addition to increased rights for the Breton language and more legislative powers. Chanting slogans such as «Justice for the Bretons», «One solution : autonomy for Brittany» and «We want it, we'll have it - re-unification», the protesters showed the strength of feeling for re-unification that continues to grow (five years ago a similar demonstration attracted 5000 supporters) for this part of the French administrative region of Loire-Atlantique, which was cut off from the rest of the Breton nation in 1941.

In the last year there has been growing tension in the French department where Naoned/Nantes and its Breton envrons is currently located. Last November three Breton political activists appeared before a French court in Saint-Nazaire accused of causing vandalism to public property, following a spate of '44=bzh' grafitti (44 is the number given to the Nantes French department). The graffiti appeared on signs where public funded advertising by the President of the French Pays de la Loire region, Jacques Auxiette, attempted to show Loire-Atlantique as the Pays de la Loire region.

There was a festival atmosphere to the demonstration with pipe bands and Breton dancing, with musicians such as Alan Stivell and Jean-Louis Jossic also present. A number of elected officials also took part in the parade, including Jean-Yves Le Drian, President of Brittany Region, Patrick Mareschal, President of General Council for Loire-Atlantique and Jean-Louis Jossic, Cultural Assistant to the Mayor of Nantes.

Many activists from Bretagne Réunie called for re-unification and Jean-Louis Jossic called for a referendum on the issue. The Union Democratique Bretonne (UDB) also had a large contingent of supporters in Naoned/Nantes for the event. A UDB youth member Gaël Briand said:

«It's such a good thing that youth of Brittany participated to this demonstration! It means that the cultural movement is getting younger so it's good news for the future... it was also a great success for UDB and UDBy...»

The Celtic League have been a long campaigner of Breton unification. At its 2000 AGM it reiterated its earlier call to reunify the historic Brittany with the resolution:

«This AGM of the Celtic League:

Reiterates its call to the Breton Regional Council and the Department Council of Loire-Atlantique to demand that the French Government re-unify historic Brittany in line with the wishes of the people made clear in recent opinion polls.»