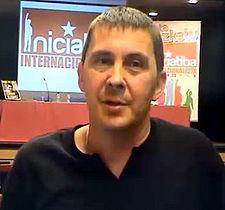 Arnaldo Otegi (above) was re arrested in October 2009 (photo: wikipedia)
Breizh/Brittany: Basques detained by French Police in Brittany

Two Basques who are alleged to be members of Euskadi Ta Askatasuna (ETA) were arrested by French police in the Breton town of Carnac last week.

Aitor Eliza and Oihana San Vicente Saez de Zerain were both arrested while allegedly using a stolen car and were reported to be armed. Eliza is thought to belong to ETA's 'political' wing and Zerain, a woman, had appeared in a newspaper photograph last year alongside other ETA members.

The arrest of Eliza and Zerain, follows the arrest of ten other Basque political activists on 14th October 2009, the most famous of which was Arnaldo Otegi (the former member of outlawed political party Batasuna). Otegi, who has spent several spells in jail, was released from his last conviction in August 2008 after serving 15 months for 'defending terrorism'. On the 14th, all ten activists were arrested on suspicion of forming another political party. The arrersts included members and leaders of Basque trade unions.

The arrest of the ten sparked a mass protest in Donostia - San Sebastian on 16th October, where thousands turned up under the slogan of 'Askatasunaren alde.

Eskubide guztiak guztiontzat' (For freedom. All rights for all people) and included representatives from Basque trade unions and leading members of parliament for various Basque nationalist parties. The general secretary of Eusko Alkartasuna (Basque political party) said that the arrests were designed to «hinder a political process to find a solution to the Basque conflict via democratic and political means».

In July 2009 the European Court of Human Rights (ECHR) in a shameful judgement ruled in favour of the Spanish government following a case brought against it by lawyers representing Batasuna.

According to Irish policial party, éirígí, the ECHR ruling is:

«...a disaster for democracy across Europe as any government with a »pressing social need« could ban any party which is a threat to the status quo.

»What should be worrying for all political activists is that what is happening in the Basque Country could happen anywhere in the EU under the new rules of `democracy' as laid down by the ECHR judgment of July 2009.

Basque activists in trade unions, political parties, youth groups and social movements are fighting a battle that we might all have to fight some day; a fight that has to be won or our rights as people to choose who we wish to govern us will be dead and buried with no chance of resurrection."

The Celtic League supports the Basque right to self determination, in addition to all other oppressed peoples rights to campaign for independence throughout the world.