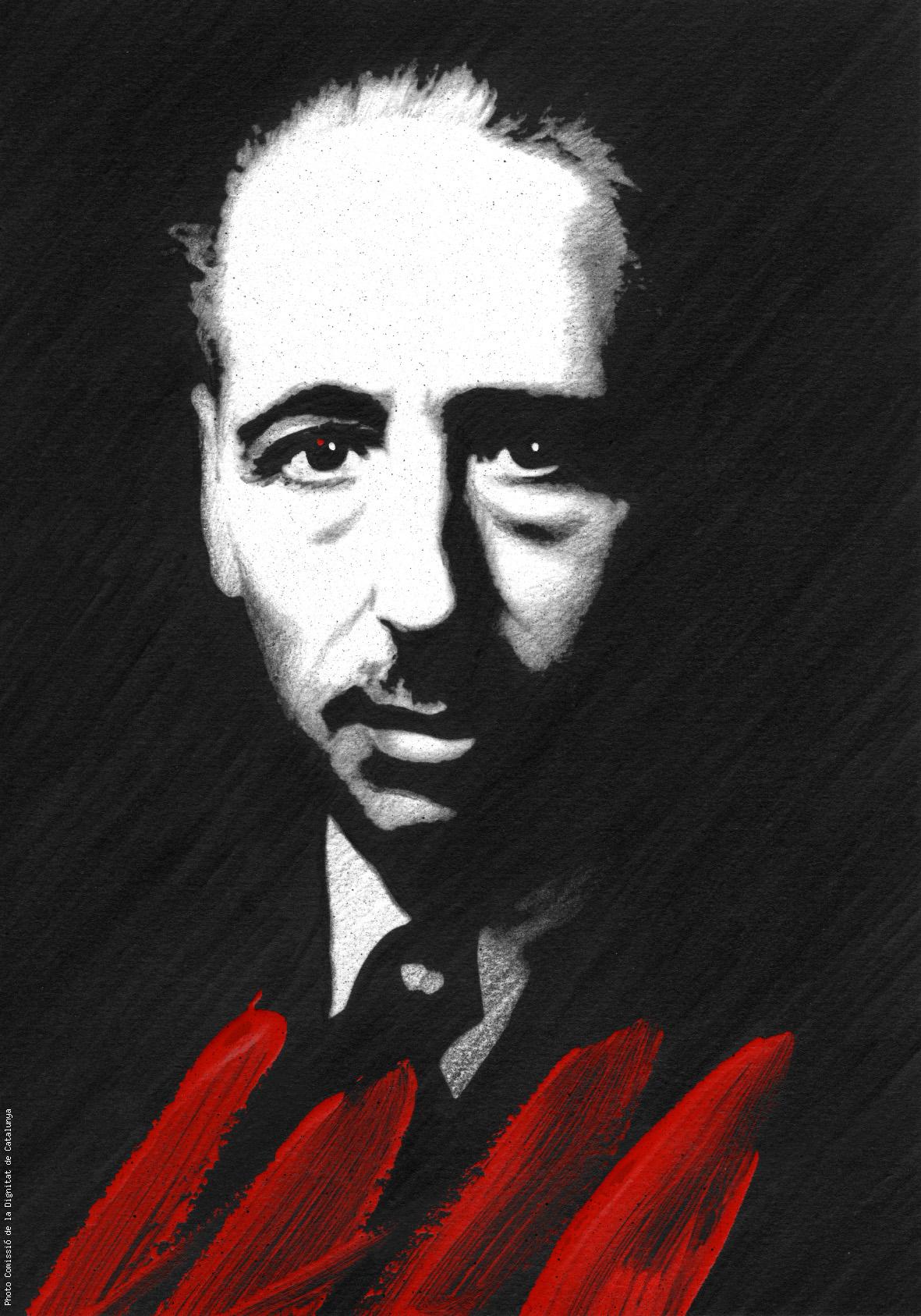 Visca la llibertat. Lithography by Antoni Miró : 1940-2010. Lluís Companys condemned 70 years ago. A work realized for the commemoration of 2010. 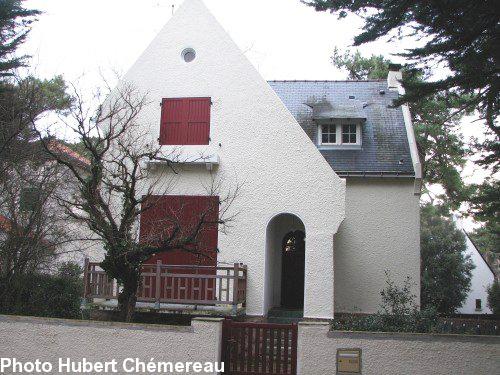 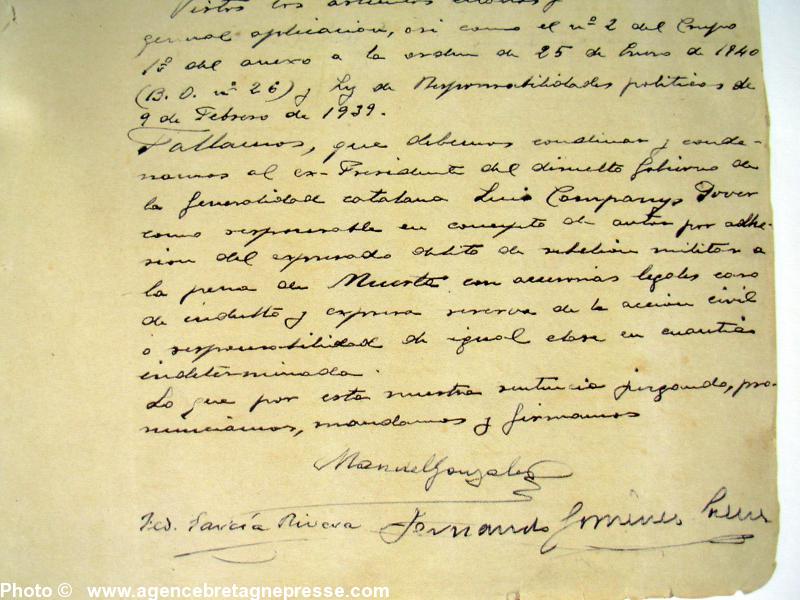 Lluís Companys e Breizh. During the year 1940, Lluís Companys, first elected president of the Generalitad of Catalonia, finds a refuge in the Breton station of La Baule / Ar Baol. The pro-Franco police forces are in his cases and search in vain for him in Paris. The president of Catalonia found rest for a while with his wife and a nephew at 5 avenue de Ploërmel in the villa Ker Imor Vad which means The house of good mood. In 2005, the son of the owners of this néo-Breton style house, a young adult in 1940, remembered still well to have met with Lluís Companys.

Why did Companys remain in La Baule instead of fleeing from the nazi invasion?

Having left Paris, he thought of putting his son ,r suffering from a serious mental illness, at the marine center of Saint-Goustan in Le Croisic a close city. According to some sources, Lluís Companys refused the proposal of Breton nationalist militants to leave for Ireland because of his son who was stills in an establishment of the Paris region. This offer is not surprising when one knows in particular the assistance brought by the Breton Yann Fouéré, as a high official, to members of the Basque government. This Breton militant had been able to provide identity papers to the president of Euskadi, Jose Antonio Aguirre, who will reach the USA with his family after a long wandering through Europe. The proximity of the harbour of Saint-Nazaire / Sant-Nazer and its Transatlantic connections in the direction of Cuba (1) and Vera Cruz can also be a reason of the presence of the Catalan president on the south coast of Brittany.

Asked in 2008, the director of the Departmental Archives of Loire-Atlantique (2), announced in a mail: “a card is kept in the name of his wife Companys born Ballester Carmen, under the temporary quote 3008 W6. This card sends back to a file at present in process of classification. It is about a request for a residence permit of January 1942 with mention that she is Louis Companys' widow and that she resides in avenue de Ploërmel at La Baule”.

Refusing to forsake his son, Lluís Companys will be arrested by the gestapo on August 13th, 1940 in the villa Ker Imor Vad. The nazis are accompanied by Pedro Urraca, a pro-Franco agent of bad memory. This disastrous character – whose file in the Spanish Interior ministry is forbidden to access until 2021 – is at that time in charge of a network of Franco's police officers, who track down – with the complicity of the French State – the republican leaders in escape. This very peculiar Embassy Attaché is the first person to question the Catalan president in the Prison de la Santé in Paris under the authority of the gestapo. Accompanied by a German officer, Urraca leads Lluís Companys to Irun to deliver him to Franco's henchmen. If, when under the responsibility of the Germans, Lluís Companys was correctly treated, when he arrived at the Safety Head Office in Madrid, the leader of free Catalonia had to undergo five weeks of tortures, vexations and various humiliations before being transferred to Barselona on October 3rd. After a sham trial in the Fort of Montjuïc, he is condemned to death on October 14th. Until his last breath he was an example of dignity and courage. On October 15th, 1940 at 6 30 am, before falling under the bullets, Lluís Companys shouted with strength and firmness “Por Catalunya!”. For Catalonia!

Since 2007, the CREDIB and the Cultural Institute of Brittany have had various contacts with the Generalitat and with Catalan militants to pay in Breton land an homage to this great Catalan patriot. They had also been in touch with the City of La Baule / Ar Baol to organize a day of homage by conferences with some working tracks:

– Projection of a film on Lluís Companys ;

– Biography of Lluís Companys with a particular lighting on its stay in Brittany ;

– A geopolitical approach of the arrest of Companys: military situation in Europe in summer 1940, part of the nazis and the police forces of Vichy Governement in a context of pressures from the pro-Franco régime ;

– The presence of Spanish republicans, Basque nationalists and Catalans in Brittany ;

– The law of historical memory: problems with the Companys case.

If this project could not have succeeded earlier, let us greet the initiative of the Generalitat of Catalonia, supported by the City of La Baule / Ar Baol, to organize an homage to the first elected president of Catalonia, on August 13th, 2010 near-by the Ker Imor Vad villa. Brittany was the last ground where he lived as a free man!

1. See the dramatic case of these Jewish refugees gone from Sant-Nazer on the liner “Flandre”, who were driven back on their arrival at Havana , in May 1939, and were returned to Brittany.

2. In a note of July 30th, 1942 to the General secretary of the Police force in Vichy, the prefect of Loire-Inférieure announces that Lluís Companys' wife lives in Paris since May 4th, 1942.

The "Research and Diffusion Center of the Breton Identity" - CREDIB Sant-Nazer is an association under the French law of 1901, created in Saint-Nazaire (Loire-Atlantique, Brittany) in 2000, member of the Cultural Institute of Brittany.
The Center works for acknowledgement and promotion of the Breton identity in the Nazairian region. The CREDIB also keeps alive the links between Sant-Nazer and the British Isles by its numerous contacts with Scotland and Wales.
10 rue Aristide Briand,
F-44600 Sant-Nazer/ Saint-Nazaire.
Voir son mur