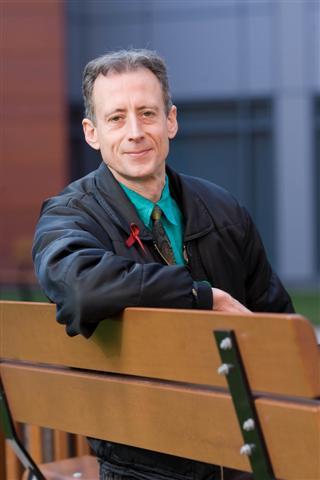 Peter tatchell - UK based human rights campaigner argues that Cornwall has a right to self rule.
'SELF RULE FOR CORNWALL' - RIGHTS CAMPAIGNER SPEAKS OUT

Following on from the success of a recent on-line article in the London based Guardian newspaper website, Peter Tatchell, an international human rights campaigner has told the League that «an extended feature article about Cornish culture and nationalism should appear in the [newspapers'] magazine later in the year or early 2009».

Mr Tatchell, who campaigns on issues such as gay rights and the environment, is also the Green Party's parliamentary candidate for Oxford east, England. In his article, 'Self-rule for Cornwall', Tatchell wrote about the legal challenge by Cornish nationalists to the UK Government's decision to refuse the Cornish people national minority status. He also explored the question, in a general way, of why if Wales and Scotland consider themselves separate nations, why shouldn't' Cornwall have its own independence too?

'Self-rule for Cornwall' was so widely read and commented on that it reached the number one spot in the 'Comment is Free' section for the term that comments were open to it. Rather than the 150 comments needed to reach the top spot within a period of several hours, Tatchell's article was commented on over 1500 times, highlighting the strength of feeling that this subject arouses among people.

In response to Tatchell's article, Matthew Taylor, Liberal Democrat Member of Parliament (MP) for Truro and St Austell, said that «Cornwall doesn't need a separate parliament». Taylor said that Tatchell is wrong to think that most people in Cornwall want a separate parliament, but Taylor seems to forget that 10% of the electorate (over 50 000 people) were calling for a Cornish assembly for a separate Cornish nation, only a few years ago â€“ a call, it must be pointed out, that was supported by all the Lib Dem MP's in Cornwall, including Taylor himself!

The Celtic League wrote to Mr Tatchell congratulating him on helping to increase the awareness among the general public about the distinctiveness of Cornwall and the Cornish people. In response, Mr Tatchell commented that he was «Glad to do my bit to help the cause». Tatchell is among a number of prominent people from outside of Cornwall in recent years to support the Cornish cause for recognition.

Comments are now closed for the 'Self-rule for Cornwall' article, but it can still be found by following the link below:

The full text of the letter sent to Peter Tachell from the League can be found below:

I am writing to congratulate you on the above article published by The Guardian Online. It was indeed encouraging to see a more enlightened perspective about Cornwall and the Cornish being portrayed in the London press.

The Cornish have been deliberately ignored and curtly dismissed in numerous ways for too long for merely raising the fact that they are Cornish, feel different and want this to be widely acknowledged. As we can see from some of the many comments on your article, people can feel very afraid by talk of 'Cornishness', which seems to rock a belief in their own cultural and identity values.

Recognising the Cornish as a distinct group also has a wider significance for those people who are concerned about the place of England (or Britain) in the world. Where it is now generally acknowledged throughout England that Isle of Man, Scotland, Ireland and Wales are not part of one country called England and that these are distinct peoples living in distinct nations, Cornwall and the Cornish are still the victims of the collective cultural abuse that was once so common in these islands.

I am sure that some of the comments and opinions in your article astounded more than a few of your readers, even those who were aware of your own outspoken reputation. I sincerely hope that your writing educates or at least entices readers to find out more about Cornwall for themselves. As you know, people need to be shown that they shouldn't be afraid of difference, but should actually embrace it as an enriching experience.

Your article has contributed to an increase in awareness among its readers about Cornwall and the Cornish people and it is for this reason I would like to thank you on behalf of the Celtic League.

A campaign web site promoting a range of equality and rights issues is maintained by Peter Tatchell here: