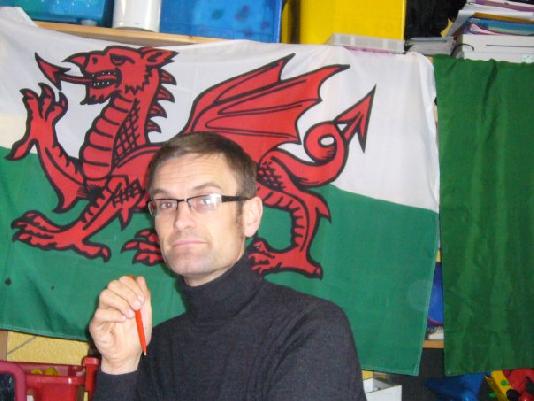 The youth of the Breton nationalist political party, l'Union Démocratique Bretonne (UDB), have interviewed the General Secretary (GS) of the League, Rhisiart Tal-e-bot, as part of a series of interviews of young nationalist and/or regionalist young people involved in politics throughout Europe.

The interview, the first one in the series, asks the GS about his role and work as President of the European Free Alliance Youth (EFAy) and in the Celtic League. In the interview –which is in French - the GS talks about how he first became involved in politics and political issues and how this led him on to joining the League. An edited version of the interview can be found below (in English), with the link to the interview in French found below that:

"I am originally from Wales and was a youth member of Plaid Cymru for many years and once represented Plaid youth at a conference in 1999 in Aabenraa Denmark on minority issues. I moved to Cornwall in my early twenties and joined Mebyon Kernow – the Party for Cornwall (MK), the 'sister' nationalist party of Plaid Cymru. I became active in MK fairly quickly and have stood in several elections, been on the National Executive and became the youth Leader of young MK. I am now the Secretary of Kernow X, the new name of MK's youth group."

"I was lucky in the sense that I went to Cornwall. I had never visited Cornwall before I moved there and was amazed at how much like Wales it was. The mindset of the people, the landscape, the culture, the language was all very familiar to me. I felt like I had found a long lost relative and it gave me an additional curiosity and the beginnings of a whole new perspective."

When I was a child, I remember feeling very isolated in Wales. I felt that Wales was being oppressed ...and had a feeling of hopelessness ... how Wales could be independent faced with these odds. I initially joint the Communist Party (due in no small part to the influence of a family friend who had fought in the Spanish civil war), because I thought that if I was able to join up with other people who felt the same way as me then perhaps we could achieve something together. However, that vision was broken when I came to understand that the British Communist Party did not want an independent Wales ... after that I joined Plaid Cymru ...!"

"It is difficult sometimes to see the bigger European picture, especially when your group is relatively small, with minimal resources and are routed very much politically in a specific (often small territory). It is easy to stay within your own territorial framework, driving forward the campaigns of your groups and parties, fighting elections and getting on with the everyday running of a small organisation. However, it is necessary sometimes to take a step back, stop and look at the horizon and especially to travel a bit."

"I am passionate about my work in the Celtic League and work voluntarily for the organisation on a daily basis. My work involves campaigning in a whole array of spheres, keeping contact with the different Branches and members, resolving any disputes, general administration and a whole lot more. The work can be diverse and there is usually some political element involved..."

"I am lucky in the Celtic League in that I work closely with people with a vast amount of campaign experience in the NGO sector in the Celtic countries. They regularly provide me with advice and very useful information so that I can undertake my work effectively."