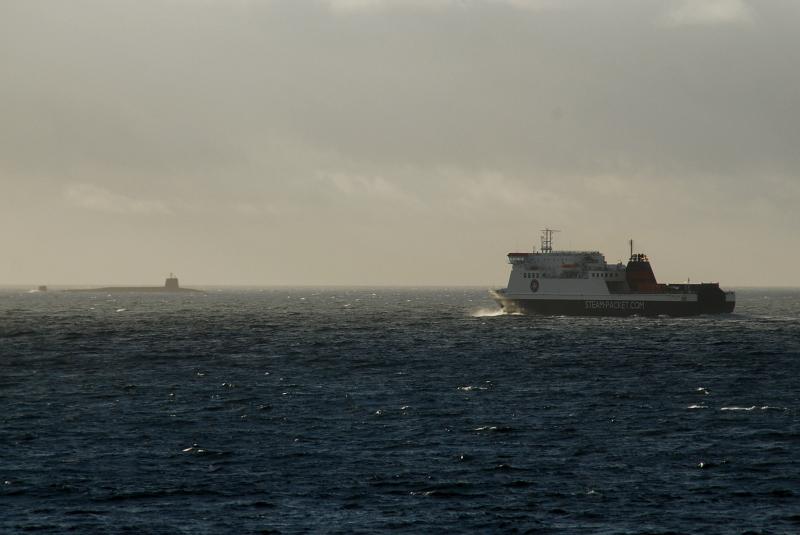 The recent broadcasts of a documentary (by France 3 and TV5Monde) about the loss of the Motor Fishing Vessel (MFV), Bugaled Breizh, and the threat posed to MFVs by submarines, highlighted a dangerous menace posed to mariners during the Cold War which has not gone away.

Celtic League monitored this threat for almost quarter of a century and the archive of documents we accumulated, now lodged with the Manx National Heritage Library, provided a useful resource to the film makers.

However, it was not just the threat to mariners that these leviathans of the deep posed. Modern submarines, with their nuclear reactor power sources and nuclear warheads, pose a specific environmental threat when things go wrong. In the early 1980s we logged two accidents in the South East Irish sea both, coincidentally, involving the same United States nuclear submarine (USS Nathanael Greene - SSBN 636).

In March 1986 we became aware of an incident to the south-east of the Isle of Man when several naval vessels and aircraft were active in the area. It transpired that the Nathanael Greene (with a gross weight of 8250 tonnes, twin nuclear reactors and 16 nuclear warhead tipped missiles) had struck the sea-bed whilst in transit suffering severe damage to her hull, rudder and ballast tanks. The vessel was eventually able to surface after 72 hours and towed initially to Holy Loch and then on to her home port in the United States where the damage was found to be so severe that the vessel was decommissioned and stricken from the Naval Vessel Register on 31 January 1987.

The USS Nathanael Greene had also been logged by the League two years earlier when one of her propeller shafts sheared approximately 24 miles South East of Langness (Isle of Man). The vessel, unable to manoeuvre safely, was towed to Holy Loch by the RN tug Wakeful with a civilian manned recovery vessel (Seaforth Clansmen) and other vessels providing assistance. The lost propeller shaft was later also recovered.

There is little doubt that both incidents could have resulted in serious environmental damage to the marine environment. Whilst it is unlikely that any radiation pollution occurred in the first (propeller loss) incident there is no doubt that in the 1986 event when the Nathanael Greene suffered severe hull damage radiation pollution did occur. Had the vessel foundered completely and broken up the consequences are unimaginable. The contents of twin reacrors and multiple nuclear warheads would have posed an horrendous recovery operation - even if it were achieveable. What is also clear is that these incidents of submarines 'bottoming' (striking the sea-bed at speed) were not uncommon - such events are freely spoken about on submariners forums.

The potential for serious environmental catastrophe in the Irish sea still continues. The comparatively shallow sea area around the Isle of Man is still used as an exercise area and testing grounds for these large nuclear vessels. This month (October 2008) a massive Royal Navy SSBN was photographed in coastal waters off the east coast of Mann. These substantial vessels, 8000+ tonnes with two nuclear reactors, are an accident waiting to happen - and when it does happen it will be too late!