Against the mining projects of France in Brittany!

We, elected members of the Parliament of Brittany, declare our opposition to the implementation of mining prospecting projects decided by France on our territory. 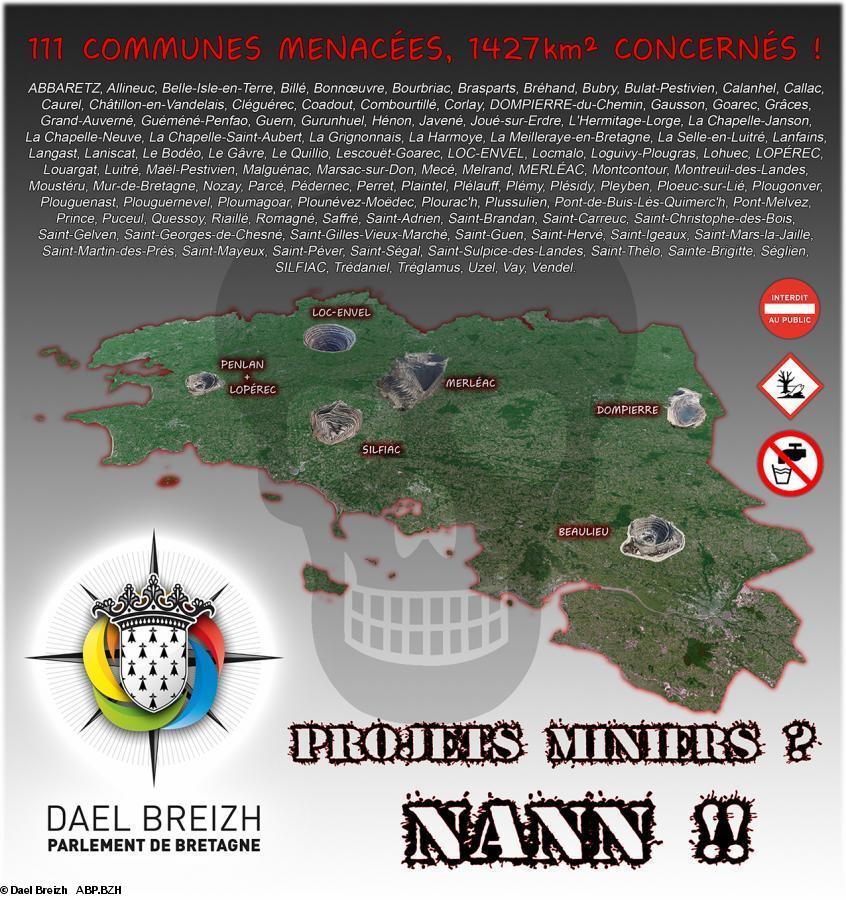 Dael Breizh against the mining projects of France in Brittany!

These 7 Exclusive Permits for Mining Research (PERM), prefiguring future operations, were granted to the Australian company Variscan-Mines whose object is to make prospecting. These explored areas will then be placed on the stock exchanges to be sold to the highest bidders ...

At no time was the entire Breton population forewarned or consulted of what was decided for its territory. The proof of it is: The great majority of this population has never even heard of the existence of these mining projects, which concern 111 communes spread over 143,000 hectares!

The only communication that can be found is made only locally by the company Variscan!

The latter even allows itself to use arguments that these mines would be clean and that they would create jobs...

At the height of cynicism, the Variscan society goes so far as to approach the neighboring schools so that the pupils themselves relay these false information to their homes.

The lie is total when one knows that a clean mine does not exist, and that the areas to be prospected are the water tower of Brittany. Our streams will be irremediably impacted, the image of our Breton agriculture will be degraded and hundreds of farms will be condemned. Local people will be the owners of unsaleable homes, depreciated heritages in polluted environments.

As for the famous job creation, we all know that for these large-scale mining projects, miners' teams are «turbo-workers», mercenaries from low-cost countries, working more than 12 hours a day on a few weeks and then return home while another team takes over.

The recent news show us that the authorities refuse to cancel these projects, despite the mobilization on the ground, despite the studies and the arguments put on the table... Proof is that decision-makers and financiers have long agreed, and that ecology and population are not at all taken into consideration!

That is why the Parliament of Brittany denounces these projects, which run against the COP21 agreements, and these unworthy behaviors that bring us back to the colonial era!

The Parliament gives its full support to all associations and collectives, which oppose these PERMs and defend the interest of all of us.

See also by Vigil'Oust, an association of Merléac (Côtes-d'Armor, 22) against the drillings (in French, only the title is translated, here):

Voir aussi :
This body right now does not have any recognition as an institution and the laws it may vote cannot be enacted since Brittany does not exist as an independent state or even as an autonomous region. However, this Parliament was democratically elected in November 2016, elections organized by the association KAD, Kelc'h An Dael (voir le site) . This parliament sits since January 2017, on the basis of monthly and nomadic parliamentary sessions in Brittany historical territory. Not wishing to wait for official reunification of its territory and independence, the elected people of this Parliament work on a constitution, body of laws, and concrete resolutions facing the problems of everyday life. The work of elected people and commissions shall be visible here (voir le site)
Voir son mur