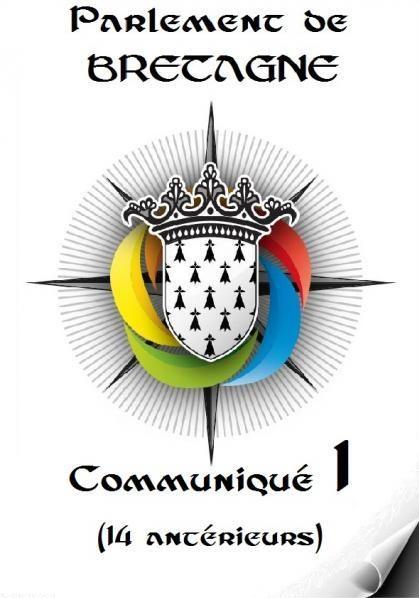 After the first election of the Parliament of Brittany which took place on Sunday 27 November 27th in Surzur ( voir l'article ), and where 33 candidates were elected as Breton parliamentarians, here comes the time of the official ceremony of their installation where they will publicly pronounce the oath. This historic day will take place on Saturday, December 17th, 2016 at Jo Baron's place, Kerguinerien, 22170 Lanrodec.

This place was not chosen at random, since Jo was unjustly prosecuted by the French justice for a fire of portico of which he was not responsible. He was released on appeal in Rennes on November 30th, 2016. The benefits of this day will be returned to him as a token of thanks for his welcome, as well as solidarity for his legal costs.

After this installation of the Parliament and Parliamentarians at Jo Baron's, the Parliament of Brittany will be nomadic and will travel every month and every sitting in a different place of reception in Brittany, in order to go and meet the voters and cover the whole Historic Brittany.

Seats, chairs or benches are installed in concentric circles in the spirit of the Arthurian Round Table, with the first circle being reserved for parliamentarians, then according to the places available to KAD (Kelc'h An Dael) members, then to the directors of commissions present and voters. This geographical and concentric installation of the seats is done by means of a compass, where four entrances are left at the four cardinal corners, each adorned with a national Breton flag: at north the Gwenn ha Du, at east the Ermine Plain, at south the Kroas Du, at west the Breton Admiralty flag. An empty seat in Gwalarn (north-west) will be adorned with a Anne of Brittany's banner, and no one will be able to sit down there... It is the symbolic seat of the perfect parliamentarian, incorruptible and flawless!

In Lanrodec on December 17th, the reception will proceed since noon, when we can have lunch (sausages galettes and pancakes) accompanied by Glenmor's voice, our national bard.

On this highly symbolic and historic day, it is our way of paying tribute to this great awakener of the Breton conscience. This exceptional day is opened to all, journalists and non-voters, unlike the future working sessions of the Parliament of Brittany, which will only be opened to Bretons registered as voters.

The installation ceremony of the Parliament of Brittany, led by the president of the "Kelc'h An Dael" association at the origin of its awakening, will then take place from 2.30 pm until 6.30 pm approximately: Elected parliamentarians will each pronounce the oath of salt and sugar from Brittany (Salt of Guerande (Armor) and "Chouchen" (Argoat)), in front of 9 white and black candles and our four national flags, on an authentic work of Bertrand d'Argentré, great Breton lawyer and historian, the 1628 edition of the "Commentaire des Coutumes de Bretagne" (The Customs of Brittany commentary).

Then, among the first third of the best elected, those who want to apply and be part of the presidency triangle of the Parliament of Brittany, elected for one year renewable, give their name. A secret ballot is held between parliamentarians present.

The second best elected has the choice between the two available functions.

The presidential vote for the next two years will no longer be one-third of the best elected but between the 33 full members.

The presidency triangle will have a role of representation outside and organization inside.

The other parliamentary functions, spokespersons, secretaries and any other possible functions according to the choice and the will of the parliamentarians, will be attributed by the vote in the following parliamentary sessions.

During this installation ceremony, once the Presiding Triangle of Parliament is elected, their Parliamentary scarves are changed for Presidency scarves with red edging(s).

The word is then to the new and first President of the Parliament of Brittany, for a short speech on his behalf and on the new installed Parliament of Brittany' behalf. For the time being no political bias is to be developed in this speech, and only the first sessions of parliamentary work will give the opportunity to publish commitments taken after discussions and votes.

Then, if the wifi allows it, a presentation of the special Parliament of Brittany website, with its forums and possibilities of internal votes to run our participative Breton democracy, will be made by the webmaster.

At the end of his presentation, and after a few final words to end the ceremony, a "Bro Gozh" will be collectively sung by the whole assembly.

Place to rejoice will follow, with aperitif and meal on reservation for the parliamentarians, the electors and their wives or husbands.

There is still much to be said about the functioning of the awakened Parliament of Brittany, but all this will be the subject of other communiqués to follow. Just a little bit of clarification is needed: the awakened and newly elected Parliament of Brittany, as well as the "Kelc'h An Dael" association which is at its origin, are completely free and unaffected by any particular political ideology or structure, with no unelected group and self-proclaimed under different names such as Breton executive or of Brittany.

The only Parliament of Brittany's purpose is to serve Brittany and the interests of the Breton people, in the creation of a true democracy in united Brittany.

For the Parliament of Brittany, Dael Breizh,

Result of the first national and parliamentary elections in Brittany! ( voir l'article )

The same article relayed by the UNPO: (voir le site)

Elections of the Parliament of Brittany: return to Surzur, return to the future! ( voir l'article )

All other press releases on the KAD website: (voir le site)