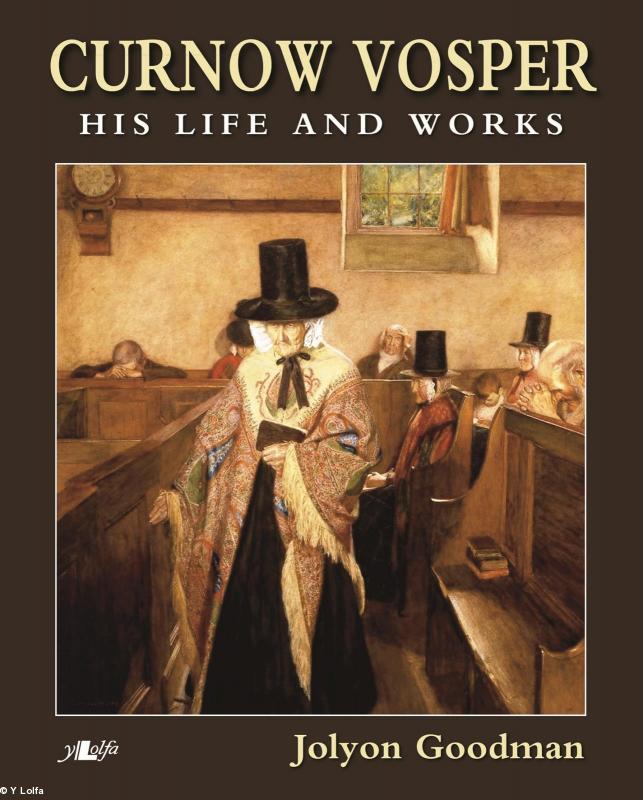 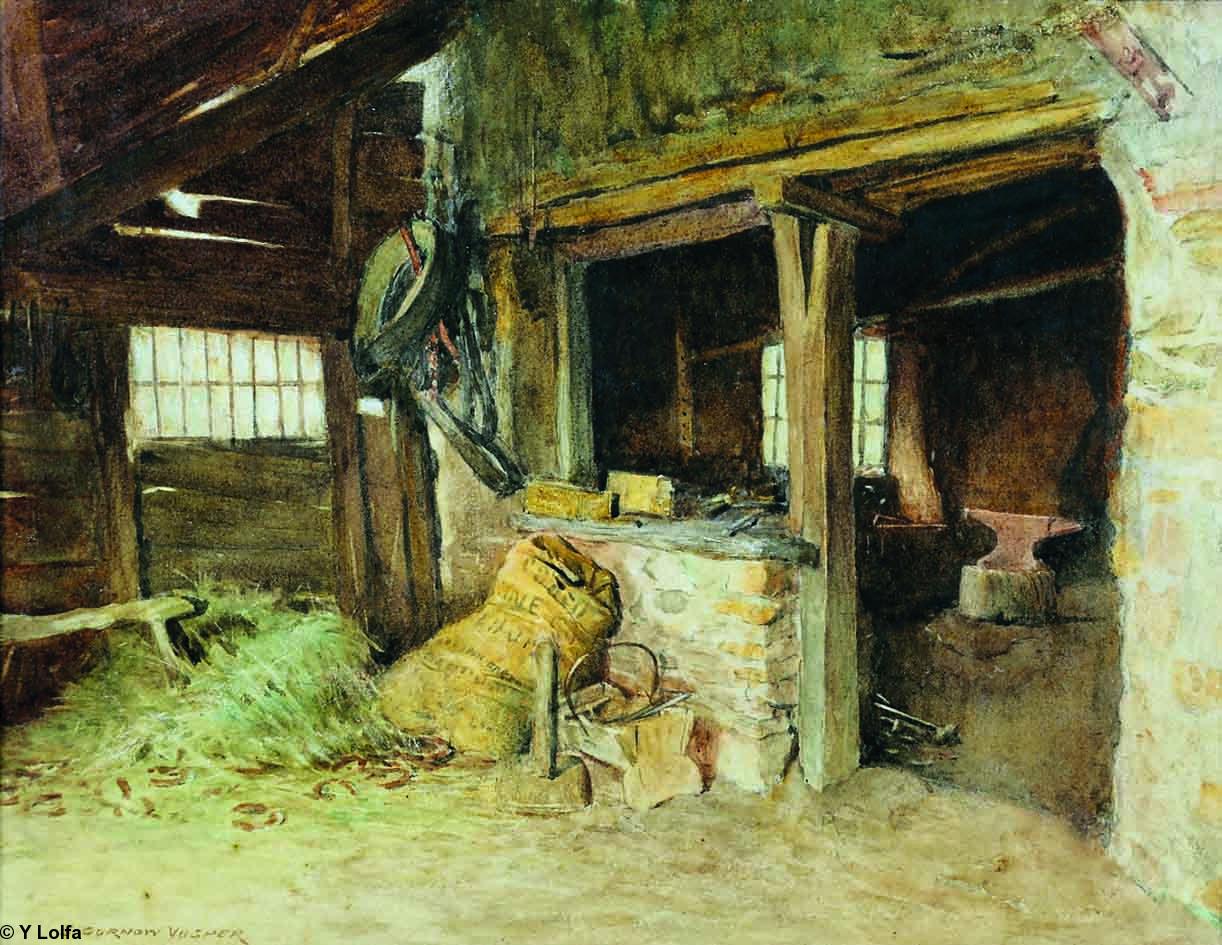 It is an iconic image of Wales to compare with pit winding wheels, leeks and daffodils, rugby posts - and ladies in tall hats. Sydney Curnow Vosper's Salem (1) has inspired and mystified Welsh poets, artists, and local historians for the best part of the 20th century.

It is a remarkable work of nostalgia, posing such questions as whether the artist contrived what has been perceived as the image of the Devil smirking in the folds of the shawl at the centre of the painting - or was it an accident. Vosper fiercely denied that it was deliberate.

Sydney Curnow Vosper (1866-1942) painted his controversial work in Salem Baptist Chapel (2), Cefncymerau, near Harlech in 1908. It was shown at the Royal Watercolour Society exhibition in 1909 and bought at the preview for a hundred guineas by William Hesketh Lever, the Warrington soap industrialist. It now hangs in the Lady Lever Art Gallery at Bebington (3), where it remains the main centre of attraction.

The story of how Lever produced prints to promote sales of his Sunlight Soap which were framed and hung in homes the length of breadth of Wales is relatively well-known. Prints of Salem can be found in half the homes in Wales. Copies of the prints were later acquired and used by [Sir] Ifan ab Owen to promote his children's magazine Cymru'r Plant (4).

Jean-Marc Michaud and Anne Le Roux for the only full exhibition of Vosper's work at Le Faouët (5) in 2001 did a huge amount of work in uncovering the story of the man. Jolyon Goodman has added much to that story and his work in tracking down so many of the artist's considerable output is quite Herculean.

Vosper, of Cornish parentage - in a letter in the archive of the National Museum of Wales he said that he was not English, but Cornish - was born in a village now a part of Plymouth and after a period apprenticed to an architect's office he trained to be an artist at the Académie Colarossi in Paris. There, in 1890, his Welsh connection began when he met [Sir] William Goscombe John and a lifelong friendship.

He met his wife, Constance James, of a notable Merthyr Tydfil political dynasty, in Brittany. They married in 1902, and she probably introduced him to the Ardudwy area which inspired Salem, Market Day in Old Wales, and a number of lesser known works which feature in this book. Of these one must refer to his first exhibited Welsh work, at the RWS (Royal Watercolour Society) in 1907. Grief is a simple but powerful watercolour set upstairs in the loft of a small farmhouse in the area.

The Welsh connection appears to have ended with the premature death of Constance in 1910. Although it was in Wales through Salem and to a lesser extent Market Day in Old Wales, that Vosper's work is best known, the man himself was better known in Brittany where he was one of many artists who had visited and worked in Le Faouet, a small town in the north-western corner of the Morbihan region.

He also spent time in Le Pouldu, the village to where Gauguin departed when Pont-Aven became too popular for his tastes. In fact Vosper spent decades in Brittany and some of his most notable works were painted there. It is known that he had learnt to speak Breton and Jolyon Goodman believes that he learnt Welsh. It is in Brittany, more than anywhere, that we see the careful naturalism of works which are genuine ethnographic documents.

Bretons at Prayer (1898), painted at the chapel of St Fiacre, a hamlet about a mile from Le Faouët, which can be seen at Cyfarthfa Castle Museum, Merthyr, is a particularly fine painting. Another from around 1898 is The Spinners, until quite recently owned by a great niece of Vosper's and since donated to the Royal Watercolour Society.

Two women at a sabot-maker's hut, in the next decade, was his first painting to be exhibited at the Royal Academy. Vosper had already shown a keen interest in the lives of the local people, and no doubt on walks through nearby Breton woods he came across clog-makers' huts. He would return to the same subject in 1928 with another painting of a clog-maker at work in a make-shift hut in the woods.

Another work, dated 1906, Un cultivateur mécanique / A Mechanised Farmer (6) - is a rear view of a Breton farmer on a bicycle, wearing a traditional hat, his blue blouson billowing as he pedals into the wind along a country road. This painting, one of a mere handful to be found in Brittany, has great wit and energy, and is quite different from the Welsh paintings. A thatched cottage and a typical field gate complete the scene. This, until recently, had been the logo of the Musée du Faouët (7).

The book also contains - and this will surprise those who are only familiar with Salem and Market Day - cartoons and many sketches which show wit and sympathy. The other substantial part of the Vosper cannon is that of the Breton Saints, 36 watercolours of statues from Breton chapels at the National Museum of Wales, which Vosper was commissioned to do by his friend Goscombe John (8). Most are mostly wooden statues.

Jolyon Goodman acknowledges the importance of the only retrospective exhibition of Vosper's work, in Le Faouet in 2001 (9) (voir le site) and Merthyr in 2002. The catalogue by Jean-Marc Michaud, then art conservator for the Morbihan, for that exhibition provided him with a sound start for his researches. This book shows it is time for another exhibition, which would be truly comprehensive.

(3) Bebington : see also Port Sunlight, a next village where the Gallery is situated, and where the Lever Sunlight Soap history is explained.

(4) Cymru'r Plant (voir le site) with a few pages of the magazine. The title has nothing to do with plant and means The children of Wales.

(6) A mechanised farmer = Un cultivateur mécanique. (voir le site) : the Vosper's painting page, who also says: “This mechanical cultivator, good-natured, travels by bicycle, his coat puffy by the wind, on a small road near the Faouët. The author shows us here his talent as a caricaturist he held especially in the columns of the British newspaper Punch. His presence in Le Faouët is attested from 1898, and, perfectly integrated into local life, he draws from this village the subjects of his watercolors and engravings”.

(8) William Goscombe John, Welsh sculptor (1860-1952). His wikipédia page in English is much more detailed than the French one, and shows many of his sculptures

(9) (voir le site) of The Writers of Wales Database. More on the author of this book review: Gwyn Griffiths has initiated projects involving Wales and Brittany, notably (…) a retrospective exhibition of the works of the Cornish artist Sydney Curnow Vosper in Le Faouët art museum, Morbihan (2001). Joined by her translator, Gwyn Griffiths, who knows well Brittany, explained how he discovered Curnow Vosper and his link with Brittany, which was the start of the exhibition in Le Faouët in 2001.

"It all started when I saw a sketch by Vosper, “Breton Nun's at Table” in Cyfarthfa Castle Museum, Merthyr, and the exhibition in Le Faouët did inspire Jolyon although he did not know about it until a few years later. Jean-Marc's Michaud catalogue was a big hep for him. But Jolyon has done great work, especially on the Welsh side".

(10) Description by the publisher: The first book solely dedicated to the life and works of painter Curnow Vosper (1866-1942), best known for his iconic painting Salem, which depicts Siân Owen entering the small chapel of Salem, near Llanbedr, north Wales. The volume contains in excess of 130 of his works, and relates his life growing up in Devon, painting in Brittany and north Wales, and exhibiting at the Royal Watercolour Society and The Royal Academy in London, the Paris Salon and elsewhere.

The author has a family connection to Curnow Vosper. Jolyon Goodman M.A. lives in Christchurch, Dorset.

(no n°) (voir le site) : The website for Welsh cultural history, Vosper, 2 pages with some paintings and preparatory sketches.

Voir aussi :
tags : Sydney Curnow Vosper,,
Gwyn Griffiths is an ABP correspondant in Wales. A Welsh delegate of the International Committee for the Defense of the Breton Language (ICDBL) and former journalist with BBC Cymru, he is a contributor to several Welsh newspapers and magazines – one of them is Cambria. He is the author of numerous books and articles in Welsh and English – many of them about Brittany. He is co-editor, with Jacqueline Gibson, of \"The Turn of the Ermine. An Anthology of Breton Literature\". (London, Francis Boutle Publishers, 506 p., 2006). He is a great connoisseur and friend of Brittany which he has visited on over 50 occasions.
Voir le mur de Gwyn Griffiths