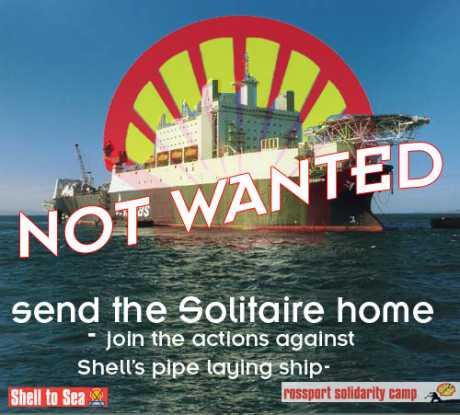 A Shell to Sea poster calling for the return of the Solitaire ship that came to lay gas pipelines.
IRELAND - CPT TO INVESTIGATE MILITARY POLICING CONCERN

The European Committee for the Prevention of Torture (CPT) has responded to concerns expressed by the Celtic League about a inappropriate and disproportionate use of military resources to support the policing of a demonstration on Co Mayo last year.

The CPT will raise the issue with the Irish authorities in due course (see below):

Your letter addressed to the European Committee for the Prevention of Torture and Inhuman or Degrading Treatment or Punishment (CPT) was received on 17 March 2009. The CPT had already taken note of the concerns highlighted by the Celtic League over the deployment of military forces to assist the policing of the protests relating to the siting of an onshore gas facility and pipeline at Broadhaven Bay, North Mayo, Ireland, following your earlier correspondence to the Council of Europe of 10 September 2008.

The CPT has noted the response from the Office of the Minister of Defence, which affirms that the deployment of a naval vessel was proportional to the request for support received from An Garda Siochana, and that Defence Forces training for military personnel is sufficient for the tasks they have to carry out.

You may rest assured that the CPT will take due account of this matter in the context of its ongoing dialogue with the Irish authorities.