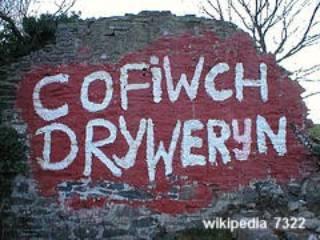 Sometimes you can act somewhat hastily by clearing away nationalist graffiti (as happened in Mannin recently) if new evidence from Wales is anything to go by.

A recent attack on an historic piece of graffiti In wales has been condemned by a committee set up to preserve it. At the site near Aberystwyth, which is regarded as a national landmark, the words Cofiwch Dryweryn (Remember Tryweryn) have been painted over.

The slogan was painted up in the 1960s, one of a series of such slogans protesting at the flooding of a valley in North Wales to provide water for the City of Liverpool. In creating the reservoir a whole Welsh speaking community was displaced and the episode sparked a long running campaign by militant nationalists.

Prior to the latest attack the wall was deteriorating and an appeal was launched last year by Cadw, the historic monuments agency, to save it by raising £80,000 to preserve the site. Indeed what at the time was regarded as vandalism as since become a National landmark and the status of the graffiti was evidenced when the Heritage Minister for Wales, Alun Ffred Jones, helped launch the appeal at the National Eisteddfod in Bala, Gwynedd, last year.

When nationalists in Mannin painted glaringly symbolic slogans about the colonial status of the Island they were quickly condemned by the Islands English police chief as `criminal damage'. The disdain for this expressive form of nationalism was also evident in elements of the English dominated media on the Island.

However the Welsh example shows us that today's acts of `criminal damage' can be tomorrows National Landmark!

Link below to Tryweryn graffit