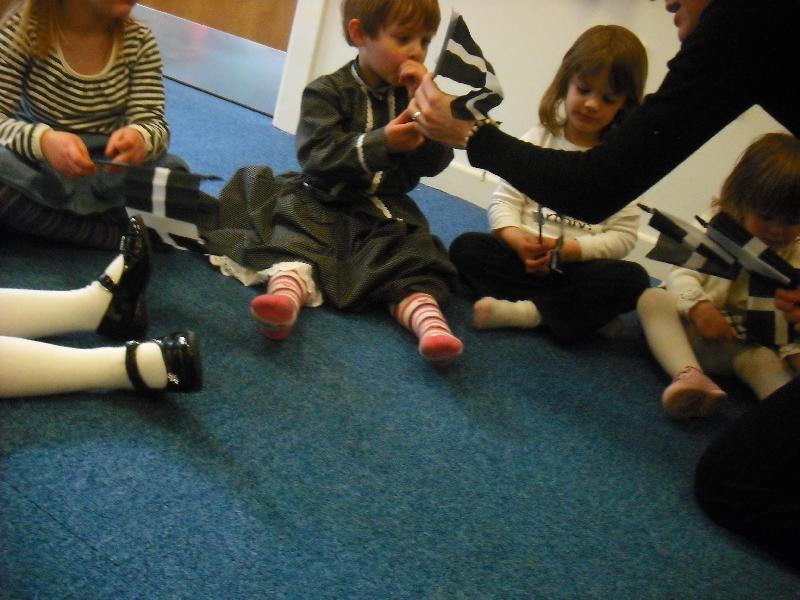 The Kernow Branch of the Celtic League donated £100 to a Cornish language preschool for St Piran's Day this year, after the money was given to the organisation by a member with the caveat that the money be used to promote the Cornish language in Cornwall.

The Cornish bilingual preschool – the only one of its kind in Cornwall – runs every Saturday for children between the ages of 2 and 5 years of age and were thrilled to receive the money from the branch. Émilie Champliaud, one of the organisers of the preschool, said that the parents were absolutely thrilled by the donation, which also included the gift of a St Piran's flag for each of the children.

Mrs Champliaud said:
"The donation to the school from the Celtic League wasn't the only money we received on St Piran's Day strangely enough and we were not expecting anything in fact."

"There is a huge cost involved though in running a preschool – even if it is only on a Saturday. Everyone who is involved in the school gives up their time voluntarily, but these kinds of donations show that our efforts to promote the language are supported within the community."


The money donated by the Kernow Branch will go towards buying materials, like paints and paper, for the children to use in the school. The school runs every Saturday during term time in the Karenza facility of Cornwall College Camborne, between 10 30 and 12 30. Anyone wishing to know more should contact Emilie on 07787318666


Issued by the Director of Information Celtic League