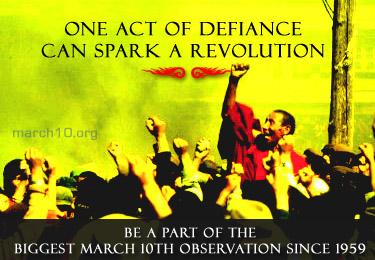 The Celtic League have reiterated concerns to the Chinese government about political repression in occupied Tibet. The plight of the Tibetan people was very much to the fore at the time of last years Olympics but has slipped from media focus of late.

The Celtic League is very concerned that the Government of the People's Republic of China continues to persecute the Tibetan people on a daily basis with violence, intimidation and suppression. For example, we have heard reports recently from a number of different and independent sources that Tibetan religious suppression and cultural assimilation by the PRC is still rife in Tibet and is being actively pursued by the Chinese authorities. We understand that the Chinese Government is now pursuing a "strike hard" campaign in Tibet in the run up to the 50th anniversary of the Tibetan uprising and have arrested thousands of civilians and monks and subjected many prisoners to physical and psychological torture.

We have also received reports from different sources that Tibetan monks must enrol on a re-education programme if they want to remain in Tibet and have been banned from taking part in religious celebrations on the appropriate day and face arrest if they disobey. The human rights record of the PRC against the people of Tibet is disastrous and demonstrates its complete disregard for humanity. The proclamations by President Hu Jintao that the intention of the PRC is to build a 'harmonious society', runs contrary to what the Government is doing in Tibet, where it is deliberately and continuously forcing itself upon all areas of Tibetan life.

The Celtic League like other human rights groups from across the world, were outraged by the actions of the Chinese Government forces last year in Lhasa and other regions of Tibet against the Tibetan people and sincerely hope that next months anniversary will not spark similar repression by the PRC. The Celtic League was disappointed by the lack of (and at best weak) condemnation of the PRC in Tibet on the part of many European Governments last year and we wrote unsuccessfully to the leaders of the Governments of the UK, France and Republic of Ireland to boycott the opening of the Olympic Games out of protest. The action of the PRC during this period and since then was the motivation for the first motion passed by the General Council of the Celtic League.

The Celtic League is fully conscious of the low regard that the Government of the PRC has for human rights organisations and individuals who express concern for the suffering inflicted upon the peoples of countries that that have been occupied. We have written to the Chinese Government on a number of occasions in the past, requesting answers to our legitimate questions and concerns for the welfare of people under Chinese rule, but have not received so much as an acknowledgement from the different Chinese government departments or embassies. We do not expect any kind of response now, but that does not stop us from trying. In this respect we can fully empathise with the position that ordinary Tibetans and their human rights groups find themselves in.

Over the last six months or so I have personally been sent copies of various Chinese publications by anonymous sources, making an attempt to explain the 'good work' that the PRC is undertaking in Tibet to 'modernise' society and give equal rights to all. I have read each publication through from beginning to end and even though I can clearly see that the magazines and newspapers are intended for propaganda purposes, it has given me a little hope that some people - even though they may not be convinced by our arguments - may at least be trying to understand them.

Rather than making the 50th anniversary of the Tibetan uprising an opportunity for the Chinese authorities to further the repression of the Tibetan people, we urge you rather to engage in immediate dialogue with Dalai Lama and other representatives of the Tibetan people with the aim of bringing about a just and lasting peace for Tibetans. Our second resolution therefore:

"Urges the Peoples Republic of China to withdraw its army of occupation and colonising populations from Tibet and to open immediate negotiations with the Dalai Lama and other representatives of the Tibetan people, with the aim of securing full independence and a just and lasting political solution in Tibet."