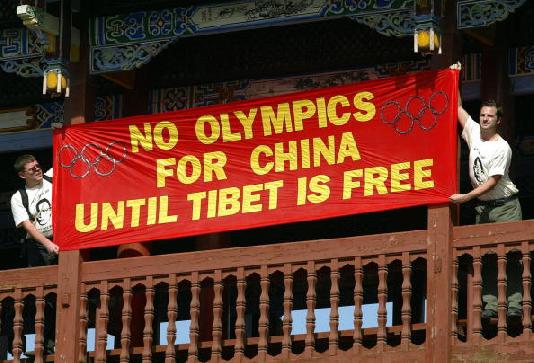 Yet another protest...
Celtic League : Olympics in danger of loosing its integrity warning

The Celtic League has reinforced its protests about Chinese oppression in Tibet as global pressure grows on the International Olympic Committee to take a stronger line with the totalitarian government in Beijing.

Celtic League General Secretary, Rhisiart Tal-e-bot, has told IOC President, Jacques Rogge, that the Olympic ideal is in danger of losing its integrity (see below).

Several League branches have also added their voice with protests to Chinese embassies in London and Paris.

Boycott of Olympic Games in Beijing 2008

I am writing to you again following the escalation of protests in regard to the hosting of the 2008 Olympics in Beijing. Over the last weeks we have seen many people take to the streets throughout the world as the Olympic flame crosses continents, badgering the procession and attempting to put out the flame.

We now believe it is time for the Olympic Committee to move the Games to a democratic state where human rights violations are not taking place on the same widespread scale as they are in China. We firmly believe that this is necessary if the Olympic Games is to retain its integrity and ideological aims.

The Celtic League would therefore like to restate its position that it is opposed to China hosting the Games while it continues to subject demonstrators and civilians in Tibet and the surrounding provinces to suppression and violence. We urge the Olympic Committee to boycott the 2008 Beijing Olympics now.