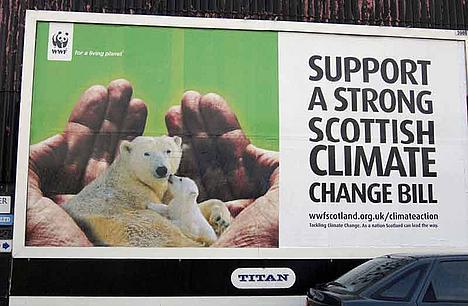 The Scottish government set itself record climate change targets last week with plans to reduce the country's carbon dioxide emissions by 42% by 2020.

The Scottish target is currently the most ambitious in the word and was agreed to by all political parties at Holyrood, in a rare act of political unity in the parliament. The targets form part of a radical climate change bill making its way through the parliament, which will mean that from 2012, the Scottish government will have to set legally binding cuts in emissions.

With increasing pressure on governments around the world to set their own high targets on carbon dioxide emissions, Scotland has shown itself to be prepared to take the lead on this particular environmental issue. Scotland's target is 8% higher than the UK government's target, which it set last year as part of its Climate Change Act. Unfortunately, under the devolution settlement, the Scottish government only controls about 30% of Scotland's emissions.

The Scottish government has been criticised however for not doing enough in other areas of the environment. Its decision to press ahead with the building of a coal fired power station and its programme to build a greater number of roads, bridges and airports throughout the country has been criticised by environmental groups.

The SNP governments decision last week however shows other nations in the world that Scotland does take environmental matters seriously and is prepared to work towards meeting its global responsibility.