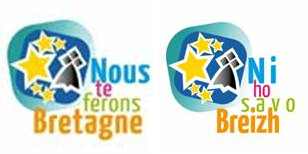 "We the undersigned Garbiñe Saez and Jone Berriozabal, members of EAJ-PNV in the Basque Legislative Chamber, want to show our support for the candidature of the Breton Party / Strollad Breizh, in the regional elections that will take place in the French government on March 14th and 21st.

Strollad Breizh is a party that advocates the unity of a political and federal Europe, the central concern of which would be the individual.

Brittany, though divided administratively by the French authorities, is a historic European nation that has a political and cultural singularity.

Facing the repeated attempts of standardization and division of Britain, implemented by various governments in Paris, we believe that the Breton Party is an appropriate movement to defend the national and cultural Breton community and the interests that concern the majority of the Breton citizens, especially in this time of serious economic and social crisis.

For these reasons, in the name of pluralism that enriches us, but has been denied so many times, we give our support to a party that struggles for a more diverse and therefore more realistic Europe, and strives to give greater well-being to its citizens."